In what could be the biggest review series in the history of Obsessive Viewer, I’m committing myself to reviewing all the movies and shows in Marvel Studios’ Cinematic Universe. You can find an index of my MCU reviews here and check out The Obsessive Viewer Podcast here. Now, here’s my review of 2014’s Captain America: The Winter Soldier. If there’s one thing to be gleaned […]

In what could be the biggest review series in the history of Obsessive Viewer, I’m committing myself to reviewing all the movies and shows in Marvel Studios’ Cinematic Universe. You can find an index of my MCU reviews here and check out The Obsessive Viewer Podcast here. Now, here’s my review of 2014’s Captain America: The Winter Soldier.

If there’s one thing to be gleaned from this review series, it’s that the Marvel Cinematic Universe, while very entertaining, isn’t without its faults and some entries that just don’t work. Fortunately, at one of the MCU’s most dispirited times, Marvel Studios’ ninth movie in its shared universe blew all that came before it away. Captain America: The Winter Soldier is the best movie that Marvel Studios has made and the MCU’s most integral entry to date. Forget about The Avengers, The Winter Soldier is the movie that fully realizes the potential of Marvel Studios’ shared universe.

Picking up with Steve Rogers (Chris Evans) two years after the events of The Avengers, The Winter Soldier weaves a conspiratorial plot through jaw dropping action set pieces while managing to shake the foundation of the MCU itself to its core. This is a movie that builds upon what’s been established in previous MCU movies and uses our knowledge of the universe to subvert our expectations. 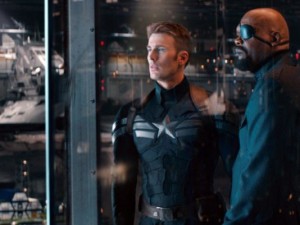 It’s also deeply rooted in the characterization of Steve Rogers. He’s a boy scout, committed to doing what’s right. But when Nick Fury (Samuel L. Jackson) shows Steve that S.H.I.E.L.D. is working on a new fleet of helicarriers with the purpose of monitoring potential threats, Steve has a crisis of conscience. For the first time in the MCU movies, S.H.I.E.L.D. itself is fleshed out and given a proper spotlight. The organization’s inclusion in this movie isn’t shoehorned in awkwardly in an attempt to establish the universe like in other MCU movies. This gives The Winter Soldier a much bigger scope as the plot takes some surprising turns.

Directors Anthony and Joe Russo created some of the best action sequences in the MCU with The Winter Soldier. Early in the movie, Cap and Natasha Romanoff (Scarlett Johansson) work alongside S.H.I.E.L.D.’s S.T.R.I.K.E. team led by Brock Rumlow (Frank Grillo) to infiltrate a ship that’s been highjacked with S.H.I.E.L.D. personnel on board. The seamless choreography of the action in this sequence sets the stage for an incredible ride of a movie.

The Winter Soldier progresses Captain America’s physicality past what we’ve seen before. In The First Avenger, Cap’s shield was a shield and occasional weapon. In The Avengers, he utilized the iconic vibranium shield a little more. However in The Winter Soldier, the Russo brothers make a point to establish that the shield itself is a weapon. Cap throws it to subdue enemies, disable aircrafts, and even break his falls. It’s a versatile use of the shield that feels like the franchise has finally realized the full potential of Captain America on the big screen.

The movie opens with a scene that introduces Sam Wilson (Falcon) played by Anthony Mackie and immediately establishes his friendship with Steve. The brevity of the scene is impressive as it not only establishes their friendship but it also introduces one of The Winter Soldier‘s more heavy themes as Sam is a veteran and his bond with Steve is based on both men dealing with life in the real world after serving. 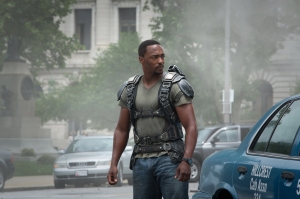 It’s a delicate topic to breach in a summer blockbuster that also deals with the real world subjects of mass surveillance and growing distrust of government entities. But the beauty of The Winter Soldier is that it juggles these themes and blends them with a thrilling plotline that turns what we know about S.H.I.E.L.D. on its ear. And what I respect most is that the movie doesn’t shy away from the problems soldiers face coming home nor does it use it solely as a device to bond Sam and Steve only to be discarded. It’s carried throughout the movie.

Despite the movie being one of the most successful MCU movies to date, I don’t want to spoil the finer details of the plot. I will say that the plot is filled with conspiracy and twists and that it skillfully avoids the Marvel Studios’ problem of one-dimensional villains. The Winter Soldier himself (Sebastian Stan) is a pawn in a bigger plot, but it’s his backstory and relation to Steve that makes him the first Marvel villain in a while worth emotionally investing in.

Instead of focusing Captain America‘s sequel on Steve Rogers’ struggle to adjust to modern day life, Marvel and the Russo brothers wisely made The Winter Soldier a movie that rooted itself in S.H.I.E.L.D. While Cap’s struggle to adjust is a part of the movie, the true heart of this sequel is about S.H.I.E.L.D., and their place in the muddy waters and dodgy morals of espionage and global protection.

In the end, Captain America: The Winter Soldier is a surprisingly nuanced blockbuster that will remind you why Marvel Studios are untouchable at the box office and make you feel hopeful about the new direction facing the Marvel Cinematic Universe going forward.

For the first time since the MCU began in 2008, I left one of their movies more excited about seeing its sequel rather than the next movie in Phase Two. The Winter Soldier stands alone as a fantastic action movie. And it also really made Agents of S.H.I.E.L.D. a lot more exciting and worth watching. So that’s a plus as well.

Blind Buy – A movie fan is only as good as his or her movie collection. Titles that earn this grade are worth adding to your collection sight unseen and at full price.