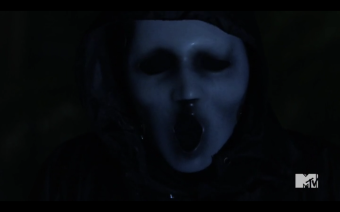 “You root for them. You love them. So when they are brutally murdered…it hurts.” – Noah

Find all my reviews of MTV’s Scream here.

Oh boy. If you’d told me 19 years ago that I would one day be watching a Scream television series on MTV, I don’t know if I would believe you. Yet, here we are. Scream is a horror franchise that is near and dear to my heart. I watched it when I was way too young (holy crap, the first movie is 19 years old) and fell in love with the self-awareness. More importantly, I was enamored by the characters’ seemingly endless knowledge of the horror genre and movies in genre. I was around 10 years old, I was impressionable, and damn it, I wanted to love movies the way the characters in Scream did.

So when I found out about MTV’s series, I was naturally hesitant. When I sat down to watch the pilot episode, I went in with as much of an open mind as I could. However, as open as my mind was, MTV’s iteration of the self-referential horror property that I grew up loving and patterning my movie viewing after still fell short for me.

Scream takes place in the town of Lakewood and centers around a group of incredibly unlikeable teenagers. After a video showing Audrey (Bex Taylor-Klaus) making out with a girl (Rachel, Sosie Bacon) goes viral, the girl most instrumental in posting it (Nina, Bella Thorne) is murdered. After news of the murder spreads, the teenagers decide to throw a party in her honor.

This is how we’re introduced to the characters we’ll be spending the next 10 episodes watching them live or die. Scream’s biggest fault is that the characters don’t resonate. The scene where the characters discuss the murdered classmate while also planning the party is a pale imitation of a similar scene in the original movie. The wit and clever turns that Kevin Williamson put into his original screenplay is absent in the MTV series.

A character laments Nina’s passing by saying she “can’t believe she’s just a body now.” Jake (Tom Maden) annoyingly retorts, “She was always just a body.” It feels unnecessarily crass and a far cry from Jamie Kennedy’s Randy’s witty remark about Casey’s “liver in the mailbox” in the original movie. This isn’t an isolated issue. Throughout the entire episode, every character seems wholly unaffected by their classmate’s grisly death. It’s a plot device that sets up the entire arc of the season, yet it lifts right out of the story. It’s problematic and incredibly distracting.

If I separate my feelings for the original Scream movie and look at the pilot episode of Scream the series objectively, I’m still fairly underwhelmed. The self-referential scenes where characters espouse their knowledge of movies and television feel forced, awkward, and devoid of passion. Noah (John Karna) takes on the movie fanatic archetype in this show and really does manage to stand out.

He’s one of the only characters in the show with the potential to really be someone for which audiences can get behind. However, he’s a bit wishy-washy. In a very contrived classroom scene, he goes on a tangent about how slasher movies can’t work on television. Later at the party, he becomes the expert on how adapting the slasher for television works. And then, even later in the episode, he explains why a slasher would work on television.

The writers use the one likeable character they created as a sounding board to justify their work to fans of the franchise that roll their eyes upon hearing the words “MTV’s Scream.” Forget changing the iconic Ghostface mask for the series, this is Scream’s gravest disservice to its namesake.

The hollow, tongue-in-cheek scene in the classroom comes after an equally awkward prompt by the teacher (Bobby Campo) where he lists current horror series on television (Bates Motel, Hannibal, American Horror Story). Frankly, those are all better shows than Scream and therein lies the disconnect between Scream the movie and Scream the series. Williamson wrote his dialogue from a place of passion and admiration for the horror icons he paid homage to. Scream the series only succeeds in reminding us that it has contemporaries in its genre. It plays more like the writers have the name Scream and felt required by that title to throw in the ultra-meta dialogue for that reason alone.

Something I did appreciate about the premiere was that it introduced a haunting piece of lore into Lakewood. 20 years before the series takes place, a deformed teenager named Brandon James killed 5 students before being shot and killed. He was in love with a girl who grew up to be a prominent character in the life of one present-day Lakewood High School student. I liked this aspect of the episode. It’s good world building and helps establish tone as Nina’s killer makes contact in a way that makes it clear he or she has some connection to the story of Brandon James.

I am a sucker for a story about a town of secrets with a tragedy haunting its history. The references to Brandon James that the killer makes have me more engaged in the story than anything the main cast of characters said. As the season unfolds, I’m sure light will be shed on the story of Brandon James and I can only hope that will continue to hold my interest while I wait for the character to either die or resonate with me.

The series premiere of MTV’s Scream introduces audiences to a cast of characters who exist to satisfy what the script requires them to say and do. Though the series shows some promise in the mysterious backstory that haunts the town of Lakewood, I’m not confident that it can hold my interest without seriously working through the kinks in the characters. As it stands now, Scream is a hollow imitation of a horror property that was highly influential to the genre in 1996. The core premise could work well and shows a lot of promise, but the writing needs a hefty boost.

Who is the killer?

So in the episode, Noah tells Riley that it isn’t the “whodunit” that matters to their story. What matters is that we forget that it’s horror and bond with the characters. “You root for them. You love them. So when they are brutally murdered…it hurts.”

Despite that, I’m going to go ahead and end each episode review with a theory about who I think the killer is and why because I think that would be fun.

The pilot episode didn’t beat us over the head with red herrings. That was nice. There’s an obvious misdirect in Will and Jake. But I’m confident the files they have from Nina’s computer will turn out to be a perverted thing they have on the side where they hack their attractive classmate’s laptops and record videos of them. Besides, it can’t be the two of them together because it would draw far too many comparisons to the original movie.

It could be Sheriff Hudson or Kieran. Or both. I don’t know enough about Sheriff Hudson’s relationship with Maggie to pull the trigger on this theory though.

This week, I think I’m going to go with Mr. Branson as the killer. He’s got a sexual relationship with a student going on, so he isn’t exactly a moral guy. And he’s old enough to have some kind of tie to the events that happened 20 years ago. The flashbacks to Brandon James didn’t show his face. My guess is Mr. Branson is actually Brandon James. He had plastic surgery and is now back in Lakewood murdering the kids of the students who beat him in high school.

What do you think?