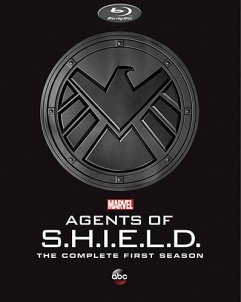 In what could be the biggest review series in the history of Obsessive Viewer, I’m committing myself to reviewing all the movies and shows in Marvel Studios’ Cinematic Universe. You can find an index of my MCU reviews here and check out The Obsessive Viewer Podcast here. Now, here’s my review of season 1 of Marvel’s Agents of S.H.I.E.L.D.

Agents of S.H.I.E.L.D. is the first TV series tie-in to the Marvel Cinematic Universe. As enamored as I’ve been with the MCU since first seeing Iron Man, I had some real reservations about Agents of S.H.I.E.L.D. In fact, I tried watching it when it first aired and gave up midway through the 5th episode. I had written it off as a superhuman-charged X-Files imitator and decided to just stick to the movies.

Then Captain America: The Winter Soldier happened and everyone talked about how much Agents improved. Having now seen the first season in its entirety, I’m wholeheartedly agreeing as I wipe the egg off of my face.

In the aftermath of the Battle of New York depicted in The Avengers, fan-favorite Phil Coulson (Clark Gregg) leads a ragtag group of agents on adventures investigating alien and superhuman phenomenon across the globe. Throughout the first season we’re initiated with Coulson’s team and introduced to some huge threats to S.H.I.E.L.D. and its agents.

Our introduction to day-to-day S.H.I.E.L.D. operations is through the perspective of Skye (Chloe Bennet). She’s a hacker Coulson recruits from a group of hacktivists set on exposing S.H.I.E.L.D.’s secrets in the name of freedom. She’s unproven in espionage but also fundamentally against what S.H.I.E.L.D. is about. She challenges Coulson and his agents with biting sarcasm that creates a strong dynamic within the ensemble and gives the series a sense of humor that’s hard not to love.

The rest of the team is an eclectic mix of personalities and specialties. Ward (Brett Dalton) is the team’s specialist in the field. He’s highly trained in combat and also serves of Skye’s supervising officer, the Mr. Miagi to Skye’s Daniel-san. May (Ming-Na Wen) is a battle-hardened spy and second-in-command to Coulson. Agents Fitz (Iain De Caestecker) and Simmons (Elizabeth Henstridge) are a pair of scientist wunderkinds who, somewhat annoyingly, are referred to as Fitzsimmons throughout the season.

The first half of the season is set on world building and sprinkling the seeds for story arcs that play out in the back half. The bad guys are a bit ambiguous and feel scattered as Agents takes an episodic procedural approach early on. One character’s transformation into the villain Deathlok takes a little too long to get rolling but once complete, his arc gets a lot more enjoyable. There are some threads of villains and nefarious activity (the Centipede project, a Clairvoyant) that don’t connect that well until the last third of the season.

There are a few connections to the Marvel movies throughout the season. Seeing as Thor: The Dark World and Captain America: The Winter Soldier were both released during Agents‘ inaugural run, the events in those movies circle back and tie into Agents of S.H.I.E.L.D.‘s story.

There are two episodes that tie into Thor. The first takes place in the aftermath of The Dark World while the second features Thor‘s Lady Sif (Jaimie Alexander) hunting an escaped Asgardian villain. The Thor episodes don’t really elevate the series but they also don’t drag the show down too much. Lady Sif’s episode could have been a failed experiment in cross-promotion but it ended up just being a slightly below average episode.

While the Thor tie-ins weren’t anything particularly noteworthy, Agents of S.H.I.E.L.D. really comes into its own as a series when Captain America: The Winter Soldier ripples through it. I won’t spoil Cap 2, but the movie takes thematic turns that change quite a lot about what we’ve come to know in the MCU. As such, it invigorates Agents of S.H.I.E.L.D. and allows the series to break out into a show that is far more palatable than the sci-fi procedural tone the early episodes took.

Outside of the Marvel Cinematic Universe, however, Agents of S.H.I.E.L.D.‘s success rests on the chemistry of the core group. The goofy use of “Fitzsimmons” to refer to two characters annoyed me slightly, but that’s by no means a reflection of my feelings toward the two scientists. Fitz and Simmons provide levity in the show’s more tense moments and their scenes together are intimately charming. Their dynamic is what you’d expect from a network show but their scenes contain such an innate cuteness that you can’t help but fall for these characters and their subplot.

May’s hardened demeanor is a little tough to get through. Her storyline relies more on her actions and interplay with a couple key characters. Her nickname is “The Cavalry” and we get slices of her past but her background isn’t fleshed out quite as much as I would have liked it to be. I’m really hopeful that it is expanded upon in season two. 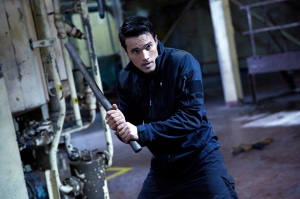 Ward is a pivotal character as he struggles with being the muscle of the group. There are some interesting moments where the team encounters obstacles that his skillset can’t save them from. He’s vocal about how powerless he is in these moments. However, Brett Dalton’s acting leaves a little to be desired throughout most of the season. He’s a little wooden, but becomes more passable as the season progresses. When it comes to acting, he’s the weak link in an otherwise strong talent chain.

The character I connected to the most in this show was Skye. She’s our conduit to the world but her arc is built around her mistrust of the government and a personal journey she’s taking. It presents such an interesting dynamic where our point of view character has a jaded and skewed perspective of the agency. It’s refreshing that this show isn’t the “S.H.I.E.L.D. love fest hour.”

Finally, Coulson was made for this show. After having small parts in many of the Marvel movies, Clark Gregg shines as the pseudo patriarch of this ragtag bunch of misfit S.H.I.E.L.D. agents. In what’s perhaps the most satisfying thing about this season of the show, Coulson’s storyline in The Avengers carries over into Agents of S.H.I.E.L.D. The show builds a mystery around what happened to him between the movie and the show to great effect. It becomes the linchpin of the season and elevates the series from optional MCU background to all but required viewing. I applaud Marvel for this decision since they could have easily written off Coulson’s return as something not that unusual.

Season one of Agents of S.H.I.E.L.D. takes a little bit of time to find its footing. Once it hits its stride, though, the show becomes a fantastic and thrilling piece of world building for the Marvel Cinematic Universe. There are plenty of guest appearances throughout the season but the core group has great chemistry with the benefit of entertaining and witty scripts. Together this creates an energetic and entertaining weekly series.