In what could be the biggest review series in the history of Obsessive Viewer, I’m committing myself to reviewing all the movies and shows in Marvel Studios’ Cinematic Universe. You can find an index of my MCU reviews here and check out The Obsessive Viewer Podcast here. Now, here’s my review of season 2 of Marvel’s Agents of S.H.I.E.L.D.

There are slight plot spoilers in this review.

Season two of Agents of S.H.I.E.L.D. begins with things very amiss amongst the group and S.H.I.E.L.D. as a whole. Fitz struggles with his injury at the hands of Ward last season, while Simmons works undercover at Hydra. Coulson hides the secret compulsion he has to draw on walls from the team while filling the role vacated by Fury last season. Meanwhile, Skye wrestles with Ward’s betrayal as the team gains a handful of new cast members.

Unfortunately, this first half of the season felt clunky to me. The influx of new characters coupled with catching up with familiar cast and dealing with Coulson’s drawing issues made for a cluttered batch of episodes. It wasn’t as much of a strain to watch as the beginning of season one. However, it was still a slog.

Something about Fitz’s arc got under my skin. The actor performed this new, darker Fitz well by lashing out in frustration as he struggles to make sense of science that used to come so easy. An additional layer to his anger is the absence of Simmons. The way he deals with the stress in the early episodes is surprising and well written. The issue I have is a nitpick that’s barely worth addressing.

Fitz’s wardrobe is almost exclusively dark clothing, made to reflect the darker tone the show has taken. This small piece of set decoration felt too on-the-nose to me. It felt like a run-of-the-mill network television set decision that came across as redundant and a little too obvious.

That isn’t the only trope-ish “network television” element to the first half of the season. After his villainous turn in season one, Ward is being held in S.H.I.E.L.D. custody. His incarceration plays through familiar “network action TV show” tropes, I found it to be pretty reminiscent of Nina Myers in season two of 24.

The plot takes Ward down some unexpected turns but I can’t help but think the writers were just as clueless as S.H.I.E.L.D. when it came to deciding what to do with him. Despite giving Ward more backstory and an overall more personal arc, it wasn’t until the second half of the season that I felt connected to his character.

There’s a lengthy period of adjustment the show takes to accommodate the new characters. I found myself struggling to keep the new characters’ names and arcs separated and even found them difficult to tell apart until about 5 episodes in. Once Adrianne Palicki‘s Bobbi character is introduced as the ex-wife of new character Hunter (Nick Blood), the new additions fit in well with the rest of the team and become more entertaining.

The biggest thing that stood out to me in this first half of the season was the lack of a compelling villain. We’re introduced to the erratic and morally grey Cal Zabo (played spectacularly by Kyle MacLachlan) who is at odds with Daniel Whitehall (Reed Diamond). Whitehall is by all accounts the major villain of this batch of episodes. However, he feels hollow and underdeveloped throughout his arc. He isn’t compelling enough to be the “big bad” of the season. Instead, he feels more like a placeholder villain.

Coulson’s mysterious markings do drive the plot to a shocking conclusion that does a lot to change aspects of the show even more than season one managed. It leaves us dangling in a cliffhanger that promises to introduce a bevy of new problems for the team in the second half of the season.

The second half of this season was much more enjoyable. I’ll say that right off the bat. Having established the new agent characters in the first half, the writers now had ample time to develop them more and tie them closer to the plot.

The weight of the fallout from the first half of the season’s big cliffhanger ending is not only felt, but it’s fully explored. The team is shaken and the ripple effect of it is felt throughout several episodes. It made it very easy to get back into the ensemble swing of things.

There’s an espionage, upper-management interference element to this half of the season that is confusing at first but reconciled in a way that is satisfying. This plot line also gives more background to some key characters. Not to mention, it ties into the main plot with ease, leading into a really thrilling pair of episodes to close out the season.

Skye spends most of this half of the season with a new set of characters. These characters and their backstory are delivered a lot more seamlessly than the new agents at the beginning of the season. They are also far more integral to the plot.

The familial element to these characters and their connection to Skye reaches a crescendo that is very well-executed. Kyle MacLachlan played up an erratic and manic portrayal of Cal in the first half of the season. In this half, now that the character is reunited with his family, MacLachlan reels back his character’s malevolent tendencies and finds a great balance in this new, heartwarming and eccentric Cal. The scenes between him and Chloe Bennet are, in fact, the high points of the season for me.

Having reconciled the mystery behind Coulson’s compulsions in the season’s first half, the new director of S.H.I.E.L.D. is given a host of new problems that tie nicely into the paternal role he has over his agents. Whether he’s working off the grid with Hunter, shooting down Mack’s attempts to work on his car, or fighting for Skye’s safe return, Clark Gregg maintains the affable and surprisingly intimidating charm of Coulson throughout the season.

Jamie Alexander‘s Lady Sif (Thor, Thor: The Dark World) makes another appearance in this season. In season one, her guest spot was a fairly standalone storyline that regrettably played more like an attempt by ABC and Marvel Studios to reach out to the MCU movie-going fan base. In season two, however, Lady Sif’s guest appearance is much more relevant to the overall plot of the season and is a much more enjoyable episode.

Season two of Agents of S.H.I.E.L.D. also introduces the Inhumans, a race of super-powered humans. Inhumans will be part of the MCU’s Phase Three set of films but won’t be released until July 12, 2019 (in between the two-part Avengers: Infinity War movies).

The introduction of Inhumans into Agents of S.H.I.E.L.D. makes a lot of sense and, in the end, provides enough dramatic turns to leave long-lasting effects on the directions Agents heads from now on. It also gives an extraordinary amount of development for Skye that makes her far different from the sarcastic hacker we were introduced to in the show’s pilot episode.

It was a little odd to see Inhumans factor so heavily into Agents of S.H.I.E.L.D., however. Knowing that the Inhumans movie won’t be released for another four years gave the plot an ancillary feel within the context of the greater Marvel Cinematic Universe. Despite having strong narrative ties to major characters in Agents of S.H.I.E.L.D., I still had a nagging feeling that they would prove to be inconsequential. 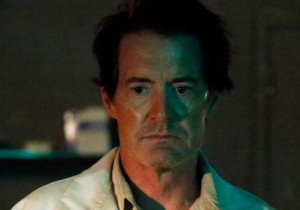 Marvel Studios and ABC have gone to such great lengths to make Agents autonomous from the movies and vice versa. But introducing Inhumans at this point into the show feels like it’s slightly disconnected from the MCU. Subconsciously, I know that being introduced to these Inhumans will have little to no bearing on the Inhumans movie down the road. The result is the feeling that their plot, their characters, and their arcs won’t matter outside of the series despite having a movie centered around them in 2019.

Despite those reservations, I was still very much invested in the Inhumans of Agents of S.H.I.E.L.D. Their involvement in the series eventually led to a tense and extremely thrilling final run of episodes.

The writing itself in the last couple of episodes of season two was on point. The writers managed to reconcile a slightly disconnected Ward storyline back into the forefront without interfering with the main conflict. They also managed to pull off a couple of game-changer moments that will make for a very interesting season three.

Season two of Agents of S.H.I.E.L.D. is less dependent on the MCU movies than its inaugural season. This time around, we’re introduced to new characters and new powers that develop existing characters while also potentially affecting the entire series moving forward. The season ends very strongly by closing certain doors but opening cans of worms that will hopefully spill over into a very promising third season.