As part of my ongoing (but limited) coverage of 2015’s Indy Film Fest, last night I attended a screening of the festival’s “Hoosier Reels” block of short films. The screening featured 6 short films “grown, filmed, dreamed, or situated” in Indiana. For this review, I’ll just go film by film and share my thoughts.

Sweet Talk is based on the 1966 short story “Where Are You Going, Where Have You Been?” by Joyce Carol Oates, itself inspired by four murders in Tucson, Arizona that same year.

The short film is a thriller whose tension is contingent on the back and forth of two characters. The tension grows organically through the interplay of Arnold (Christopher Amitrano) and Connie (Hopeann Hintz). The man’s smooth talking piques the naive curiosity of the the girl until it transitions to a more threatening tone.

The short is well-shot, using a couple key closeups to really hammer home the unpleasantness onscreen to the audience. The short film leaves things open to interpretation, but the slightly skewed angle of the last shot speaks volumes.

Michael Goldburg’s What’s Eating Dad was my favorite entry in this block of short films. What begins as a charming comedy about a woman nervous about meeting her boyfriend’s parents, quickly takes a turn toward absurd comedy with elements of horror before leaving on a power statement about denial and relationships.

I won’t spoil the turn in the narrative, but it involves a zombie and ushers the short into a run of hilarious farce. The script is pitch perfect as it juggles the conflicting viewpoints of a horror threat while keeping the characters grounded.

What’s most notable about What’s Eating Dad is the message it conveys about denial and acceptance. Through this comedy/horror plot, Goldburg makes a poignant statement about family and what it means to accept your loved ones when confronted by their shortcomings.

Shot in black & white, Thin Brothers has sparse dialogue throughout it as it takes a surrealistic look at its two leads accomplishing a task assigned via text message. The short flirts with pretension as it adopts a silent film, art piece aesthetic, having the brothers prepare and eat bologna sandwiches in complete silence.

Once the actual task is revealed, Thin Brothers sheds its pretentious art film aesthetic into a genre with more mass appeal and starkly different tone. While this departure retroactively made the first half of the short click for me, it wasn’t quite enough to engage me. The short is beautifully made, but just isn’t for me.

Dog Bowl was such a bizarre but lovely short. Debra (Marci Miller) struggles to connect with other people. She lives a life in squalor with her only true friend, her dog. Then she steals the vest off of a woman’s service dog and that leads her down a surprising path of self-discovery.

This is a story about the very human urge to fit in with the crowd and form a connection with other people. Debra’s actions are peculiar, but also full of desire. She wants to form a bond with people but she doesn’t understand how. By the end of the short, she discovers a unique truth about herself that’s satisfying despite coming via a very bizarre and sudden turn of the plot.

One-minded is an impressive piece of storytelling. It opens with a man outside an apartment building smoking as two cat burglars exit through a window a few floors above. The scene then shifts to a flashback from inside the apartment as multiple people enter the small space without alerting the others.

The bulk of the short is shot through a camera on an oscillating fan. As the camera sways left (view of the kitchen) to right (view of the bedroom) and right to left with the bathroom door in the middle, we see the action unfold as a woman brings home a one night stand, burglars hide, and a roommate comes home.

The short doesn’t feel gimmicky or forced in any way. The progression from tension to comedy to drama throughout feels natural and kept me on my toes. It was unpredictable and impressively shot while also telling an engaging story centered around the relationship between the two women in the apartment.

Unspeakable had a message to convey, which made it admirable. The story of a girl in a diner combating racism in her own way was an interesting concept to deliver the filmmakers’ message of speaking out against racism. Unfortunately the finished product just didn’t connect with me.

A confused would-be kidnapper confronts the girl after she escapes from him and his friend. Through the delivery of some slightly over the top dialogue, the would-be kidnappers/rapists are portrayed a bit too stereotypically. This gives the short a tone that’s incongruous to the seriousness of the message. 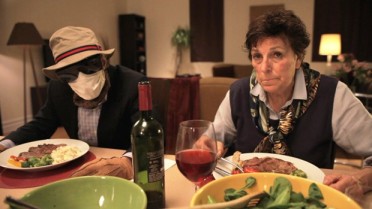 A Note on the Post-Screening Q&A

One of the many great things I’m finding with the Indy Film Fest is how the organization is making it so easy for the audience to interact with the filmmakers. Q&A’s and panels are common in film festivals, obviously. But there’s something about the location of the Indianapolis Museum of Art that makes it so comfortable to participate in the Q&As.

The Hoosier Reels screening was the first time I saw something in the IMA’s DeBoest theater. It’s a lecture hall with surprisingly comfortable seats situated close to the screen. It was a comfortable experience and having the filmmakers at the front of the hall after the screening really made it easy to want to participate.

Bonus, I got a great answer from Michael Goldburg to my question about the theme about What’s Eating Dad? So that was pretty great.