Written by Amy Schumer and directed by Judd Apatow, Trainwreck is a cookie cutter romantic comedy that follows every beat and convention of the genre to a tee but attempts to get away with it on the strength of its lead actress. Surprisingly, it almost succeeds in that regard and manages to provide some laughs as it takes its audience […] 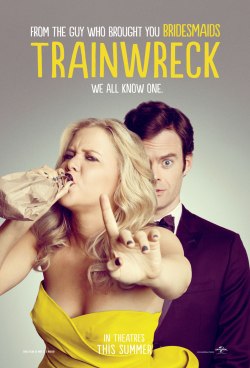 Written by Amy Schumer and directed by Judd Apatow, Trainwreck is a cookie cutter romantic comedy that follows every beat and convention of the genre to a tee but attempts to get away with it on the strength of its lead actress. Surprisingly, it almost succeeds in that regard and manages to provide some laughs as it takes its audience down familiar rom-com territory.

Amy (Amy Schumer) is an obnoxious magazine writer who isn’t commitment-phobic so much as she avoids commitment altogether. When she’s assigned to write a profile of star sports doctor Aaron (Bill Hader), she finds herself falling for him and forced to confront her skewed perspective on relationships.

The plot is nothing terribly special but it was somewhat unique in that the lead character who goes through the rote relationship journey was a woman instead the genre-dominated man. Amy eschews monogamy and has her one-night stands and regular romantic trysts down to a science. Amy’s fear of commitment and serial emotional disconnect leads to a few sex scenes throughout Trainwreck that are absolutely hysterical and the standout of the movie for me.

Unfortunately the rest of the movie is marred by a weak story that uses its plot as an excuse for hijinks instead of an opportunity to develop its characters. The movie opens with a flashback that lasts twice as long as it needs to with Amy and her sister as children being told by their father (Colin Quinn) that monogamy doesn’t work.

Instead of using this scene as a jumping off point to explore why the adult Amy avoids commitment while her sister (Brie Larson) is happily married, it uses it to give context to Amy’s obnoxious behavior and justify the crass way she treats the men in her life. It’s a weak setup for comedy that makes it unnecessarily difficult to get behind the movie’s protagonist.

Even when she meets and starts to fall for Hader’s character there isn’t much growth in the character to make the audience feign concern when the relationship hits its designated hardships. In a scene between Amy and her sister, we see that Amy is scared about her feelings for Aaron and that she’s worried about losing him. That was the closest the movie came to getting me invested in the relationship. However it wasn’t explored fully enough and was all but wiped away with a hokey and clichéd montage used to fast forward the relationship and the story.

That’s not the only part of Trainwreck that left me wanting. The movie introduces a handful of different character dynamics that all could have yielded premium comedy or character growth. Instead it crowds the movie. Amy’s coworkers at the magazine are introduced and then all but discarded to make room for the (admittedly enjoyable) conflict between Amy and her boss (Tilda Swinton). Though Swinton did a fantastic job playing the overbearing boss, I felt like the coworkers (particularly Randall Park and Jon Glazer‘s characters) were wasted potential.

Likewise, the drama in the scenes between Schumer and Larson should have been more pronounced throughout the movie. In the first half of the movie the sisters disagree on how to handle their father’s living arrangements. Later in the movie the tension reaches a crux that I don’t feel was fully earned or resolved very well.

This lack of follow-through is also evident in a couple of scenes involving Amy’s insecurities about Aaron working with professional cheerleaders. It’s introduced but never explored despite factoring into the climax of the movie. She’s insecure but why she’s insecure isn’t well defined. When it negatively affects Amy and Aaron’s relationship it feels empty and manufactured.

The supporting cast in Trainwreck is where the movie is at its strongest. John Cena plays one of Amy’s lovers early in the movie and is responsible for the movie’s funniest moments in its first half hour. There’s also some strong comedy at the expense of Mike Birbiglia as he plays the oafish husband of Brie Larson.

However, the standout of the supporting characters is LeBron James, who plays a rom-com version of himself. He’s Bill Hader’s “best friend” and though much of the humor is predicated on the fact that he’s playing a rom-com supporting role archetype, his delivery and timing is hilarious. Through him, Trainwreck is almost a satire of the romantic comedy genre and it was something that I wish would have been more present throughout the movie.

There’s a voiceover narration by Schumer that seems designed to poke fun at the more cliché scenes throughout the movie. Unfortunately, it really only succeeds in reminding the audience that the scenes she talks over are in fact hokey and cringe worthy. I honestly wonder if the narration was an afterthought once Apatow and Schumer realized how formulaic the movie was while editing it.

The movie is funny but left me wanting more out of the plot and the characters. A goofy “secret telling” game at a baby shower isn’t funny because Amy describes something off-color and inappropriate. It’s funny because the other women’s answers are so ridiculously tame and suburban that they’re caricatures of what society perpetuates as what women should be like. If the movie had focused more on that aspect of the story and put an emphasis on how different Amy’s life is from her sister’s, it would have been a much better movie for me.

Instead Trainwreck follows the formula of the standard romantic comedy from beginning to end. It’s still a good vehicle for Amy Schumer’s humor, though. I laughed consistently through the movie’s bloated 125-minute runtime despite struggling to connect with the character. But the lack of focus as the movie bounced around story arcs and one of the more formulaic and uninvolving onscreen romances I’ve seen recently makes Trainwreck an ultimately forgettable comedy. 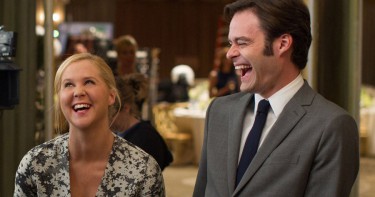 Worth a Trip to Red Box – These movies may not be worthy of your home collection, but they are worth the effort it takes to travel to your nearest Red Box kiosk.