Glass (2019) Premise: Security guard David Dunn uses his supernatural abilities to track Kevin Wendell Crumb, a disturbed man who has twenty-four personalities. I can’t remember the last time I was so invested in 2/3s of a movie only to find myself struggling so hard to hold my interest in its final act. But such is the life of the […] 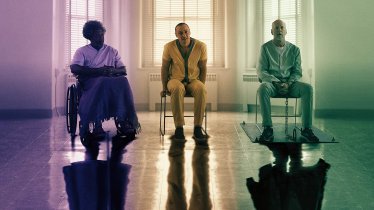 I can’t remember the last time I was so invested in 2/3s of a movie only to find myself struggling so hard to hold my interest in its final act. But such is the life of the audience member of an M. Night Shyamalan movie. As harsh as it may sound, there’s no denying that Shyamalan is one divisive and mercurial filmmaker. The Sixth Sense, Unbreakable, and Signs were all fantastic films in my opinion, and The Village was solid. But we had to suffer through the likes of The Lady in the Water, The Happening, and The Visit before he turned things around with Split in 2017.

Now, here we are. 19 years after Unbreakable and despite the odds, Shyamalan is finishing a trilogy of movies set within that universe. Now we have Glass.

Glass opens with David Dunn (Bruce Willis) on the hunt for James McAvoy’s The Beast/The Horde, who has abducted a group of cheerleaders. This makes up the prologue of the movie and I was really into that. We are reintroduced to Spencer Treat Clark as David’s son Joseph, who is taking on the role of his dad’s “Guy in the Chair”. And we get to see David Dunn in action for the first time in nearly two decades.

This prologue is a captivating way to bring us back into the Unbreakable universe and gear us up for the showdown that’s to come. Although it’s a fairly brief prologue before the movie shifts to a different location, I was completely on board with it and dug it a lot.

The majority of the movie takes place at a mental institution that is housing Kevin Crumb, David Dunn, and the film’s titular Mr. Glass (Samuel L. Jackson). I could see this narrative choice being divisive among viewers but I really loved it.

The hospital storyline introduces us to Sarah Paulson’s Dr. Staples. She works with patients with delusions of grandeur and introduces doubt into the three characters’ identities. This is an angle I wasn’t expecting to enjoy so much, but I found it very enjoyable. It continues the themes of Unbreakable and Split in a unique way. Unbreakable was about a survivor searching for purpose in his life. Split was about a troubled mind building itself up to show his true potential/purpose. What Glass does with the characters and their sense of purpose is in line with the previous films while managing to be fresh.

Once the movie reaches its climax is where I have some complicated feelings. I won’t spoil it, but I will say that the action in the finale is handled in such a way that it pays off the film’s built up tension very well.

Being a Shyamalan movie, however, there are things introduced in the last half hour that I have trouble reconciling the film with. I really didn’t hate the choices that Shyamalan made in Glass. In fact, on paper some of them are really compelling ideas. Therein lies the problem. The ideas presented in Glass are much better than the execution of them in finished product. I don’t fault Shyamalan for telling his story and concluding his trilogy the way he wanted. But coming off the magnificent reveals at the end of Unbreakable and Split, the ending of Glass feels really lacking.

Had Shyamalan stuck the landing in Glass for me, it would have been an incredible feat. Unfortunately he didn’t quite deliver in a way that would have satisfied me. Nonetheless, my disappointments account for maybe 20% of the finished movie. The other 80% is captivating, thrilling, and a very engaging study of these three superior beings in Shyamalan’s universe.

The good outweighs the bad in Glass. It’s a very effective character-driven thriller. Despite not paying off on all fronts at the end, it’s still well worth seeing.