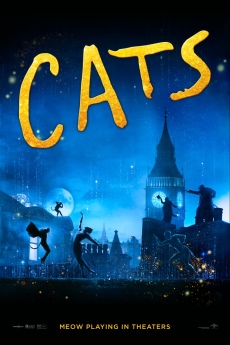 Premise: A tribe of cats called the Jellicles must decide yearly which one will ascend to the Heaviside Layer and come back to a new Jellicle life.

When the trailer for Cats was released earlier this year, it became ensnared in a viral bloodbath of ridicule on social media. Of course, it’s a film adaptation of an Andrew Lloyd Webber musical about cats holding a talent show to gain entry into cat heaven in a seemingly deserted city. It stands to reason that any version of it would look bizarre and invite ridicule. However, being a cat owner myself, I felt obligated to give Cats a whirl.

I am having a hard time remembering the last time I was so unaffected by a movie and bored throughout its entire runtime. It’s not just that Tom Hooper’s adaptation is bad. It’s that Cats is a lifeless husk of barely comprehensible storytelling interspersed with an endless string of songs, only two of which are memorable. The characters are given little in the way of character development aside from showing off their talent for the ball and having run-ins with Idris Elba’s equally undeveloped Macavity. This, coupled with the movie nearly avoiding plot setup and exposition, makes it near impossible to find anything worth latching onto.

Having not been familiar with the musical, I found myself lost almost from the outset of Cats. The film opens with Victoria (played by Francesca Hayward) being dumped onto the street and abandoned by her human owners. We then get an onslaught of musical numbers that deliver what exposition there is at breakneck speed while also rapid-fire introducing us to the cats and their specialties. It’s downright exhausting trying to wrap your head around the characters while simultaneously trying to buy into this bizarre world that’s so haphazardly introduced.

Rebel Wilson’s Jennyanydots has the distinction of having the most trippy and sensory overloaded musical number. It has some interesting choreography but I can’t remember a note of the song and the use of cockroaches with human faces was extremely unsettling. She has trained cockroaches and mice to behave like circus animals so she can win the competition. It immediately becomes disturbing and tonally all over the place when the cats pluck cockroaches at random and devour them whole. Unnerving.

Only two out of what feels like dozens of musical numbers stand out. Mr. Mistoffelees (Laurie Davidson) is the focus of the one musical number with some suspense to it. It also has the added bonus of being relevant to the plot. The other standout is Jennifer Hudson’s rendition of “Memories”. It is meant to amplify a heartfelt moment but the plot is so scattered and loose that any emotional resonance is lost that late in the movie. However, it’s the most famous and recognizable song in the musical and is performed well enough.

As far as the look and feel of the movie is concerned, it should come as no surprise the cats all look deranged and creepy throughout the movie. It’s surely a failing of multiple departments in the production. However, there’s something so disconcerting and unnatural about the way the cats’ ears move, in particular. Any ear movement immediately throws the whole design right into the uncanny valley; more so than any other design flaw in the production.

The climactic moment of the movie is almost free of actual conflict. Macavity is a villain but his motivation is muddled and not well defined (like nearly everything else in the movie). He has a strange ability that is also undefined. So when characters seem to be in peril at his hands, the suspense is almost completely absent.

Overall, Cats is just about as bad as you could expect from the trailer. The only thing that would better tip you off is the fact that it’s a film adaptation of Cats.