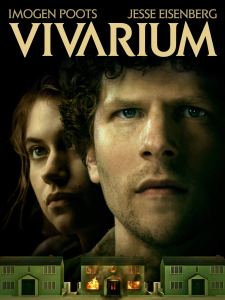 Premise: A young couple looking for the perfect home find themselves trapped in a mysterious labyrinth-like neighborhood of identical houses.

In concept, Vivarium (Latin for “place for life”) has all the makings of a mind-bending sci-fi thriller that should be rich with character development and social commentary. The film features an ominous set design showcasing an empty and endless housing development in which the film’s protagonists become trapped. It’s an idyllic, yet monstrous prison of suburbia and the only inkling of hope they have toward being released is to raise a bizarre alien child that appears in a box on the street.

Filmmaker Lorcan Finnegan’s approach to exploring the dark side of suburban life takes many of its cues and general aesthetic from science fiction heavy hitters of yore like The Twilight Zone and Richard Matheson. However, in execution, Vivarium is so focused on developing the bizarre situation its characters face, that it severely neglects the two protagonists and leaves them to be mostly empty cyphers for the audience to follow as the madness unfolds.

Jesse Eisenberg and Imogen Poots are two strong performers who do the best they can under a lackluster script. The most development Eisenberg’s Tom is given is in his decision to dig a hole in the front yard, in hopes of finding answers or a way out. It’s a flimsy plot device that’s fine on the surface. But the rift that forms between the couple because of the obsession that grows from his digging feels clumsy and unearned. This specific problem is mostly due to the decision to leave the central relationship mostly unexplored throughout the film.

Elsewhere, Imogen Poots’ Gemma is saddled with the task of surrogate motherhood thrust upon her as she bears the brunt of the alien child-rearing. Her initial refusal to raise the child (a united front with Tom) gradually gives way to maternal instincts in what is perhaps the film’s most nuanced character transformation. While Poots’ performance is the strongest in the film, it’s still not enough to reconcile an otherwise sloppy narrative structure.

Poots isn’t the only standout in terms or acting. Senan Jennings is highly effective as the supremely creepy child who isn’t quite right. He repeatedly lets loose a blood-curdling fire alarm siren screams whenever he is hungry or in need of attention. And he spends his days imitating Gemma and Tom’s mannerisms and conversations with very unsettling voice distortions. Jennings’ performance (although aided by post-production) sells the child’s creepiness and unpredictability well throughout the movie.

Unfortunately, the surreal world that’s established in the film, both by the child and the house they are forced to live in, is squandered by a lack of character development for Tom and Gemma. It’s clear they are meant to be a relatable, everyday ordinary couple. The film seems to function as a metaphor for suburban life with a dark and cynical spin on the fractured and fragile reality of the perfect nuclear family that has been romanticized for decades. It achieves this metaphor in a disappointingly rudimentary manner. Yes, the man is on edge because he has worked all day and the woman is at her wit’s end because she’s been home with the child all day. It’s very clear and surface level.

What Vivarium is sorely missing is any kind of backstory or characterization between the two leads. The film offers a scene or two to establish them as an unmarried couple but offers extremely sparse insight into what the nature (or even just status) of their relationship is. The audience isn’t privy to what makes them work or not work as a couple. Without this valuable insight and exposition, the audience is left to root for empty protagonists in a surreal situation. Vivarium desperately needs its protagonists to be grounded in reality and backed by exposition to contrast their normalcy with the science fiction surrounding them. As a result, the entire move suffers.

Lack of characterization isn’t the film’s only sin, unfortunately. While it is by no means necessary for a film of such bizarre surrealism to hinge on its final act, there is an expectation of payoff anytime a storyteller introduces such “out there” concepts. The escalation of the bizarre world the characters are in is satisfying enough. As the tension ramps up, the film opens up to showcase some impressively trippy production and set design. However, there’s extremely little emotional payoff to the story. The resolution to the couple’s ordeal leaves a lot to be desired and feels as hollow as the characters themselves. Instead of paying of the couple’s emotional story, the film leans into an ambiguity that is ultimately unfulfilling.

Vivarium has a strong setup and an eerie surreal playground that it places its characters in. That aspect of the film keeps it from being an overall bad experience as it does introduce interesting science fiction concepts to the fold. Unfortunately, the lack of characterization and an ultimately surface-level bit of social commentary keeps Vivarium from being the strong science fiction thriller it could have been.