A couple weeks have passed since I impulsively bought the Bond 50th Anniversary Blu-Ray Collection. Last weekend I decided to finally break it out and find out if it was worth the hefty $150 price tag.

So here is part one of my planned 12-part series on the Bond movies and blu-ray set. I’m not sticking to any specific time table for this, but I have a separate page for the series so the posts will be easy to find. So let’s get to Dr. No and From Russia With Love, shall we? 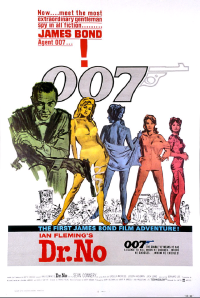 James Bond’s first big screen adventure finds 007 investigating the murder of a fellow agent in Jamaica. Along the way he uncovers the trail of Dr. No and a plot involving the US space program. Along for the ride is Honey Ryder and CIA agent Felix Leiter as Bond goes up against spiders, fire-breathing “dragons” and a trio of deadly assassins.

First and foremost, the Blu-Ray is truly stunning. I had seen the movie once before on DVD and remember it really showing its age. This version of the movie looks like it’s an incredibly accurate period movie filmed yesterday. It’s beautiful. The high quality of the picture does expose some of the filmmaking issues. You can see the film crew’s reflection in a car door and there are some spotty moments with the editing.

As for the movie, it’s good. It was chosen for the first Bond movie because of its straightforward plot and it comes across that way. But that’s not necessarily a bad thing. Sean Connery is great and his scenes with Dr. No really make the movie for me. Ursula Andress is beautiful. I was surprised both she and Joseph Wiseman don’t show up onscreen until relatively late in the movie. But their performances are still lasting on their somewhat short screen time. 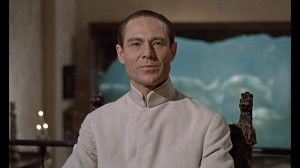 Top Level Access – 007: License to Restore (11min. 56secs) – A really interesting featurette about the restoration of the Bond movies. It’s fascinating and you can see how pleased the people involved are with the work they put into the restoration.

Declassified: MI6 Vault – The Guns of James Bond (5mins 6secs) & Premiere Bond: Opening Nights (13mins 9secs) – First is an old featurette about the guns used in James Bond. Second is a series of pictures from the various premieres of the Bond films. The narration is a little dry but the variety of the pictures kept me watching for the full 13 minutes.

Ministry of Propaganda – Theatrical Archive, TV Broadcasts & Radio Communication – A thorough collection of all the promotional material for Dr. No. 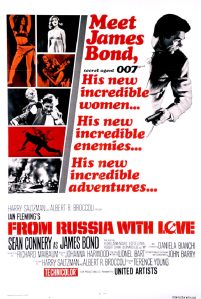 James Bond’s return to the screen takes him to Istanbul where he willingly enters a trap in the hopes of getting his hands on a Russian decoding machine. Unbeknownst to Bond, he’s being hunted by a lunatic assassin from the criminal organization known as SPECTRE.

Showing so much of SPECTRE’s operation skirted the line of absurdity in the best way possible. SPECTRE Island, specifically, was delightful with the shots of the henchmen training as Cleb walked the grounds. These are the kinds of over the top things that made me want the Bond collection in the first place and I’m happy it’s delivering so early.

The movie doesn’t let up on the action in its last half hour. From Bond’s brutal fight in the confines of an Orient Express train car, to a Hitchcock-inspired helicopter chase and a couple final surprises before the end credits, the movie successfully surpasses Dr. No when it comes to a well-executed finale.

The quality of the transfer is just as good as Dr. No. I could seriously watch the wide shots of Istanbul all day. They come out as clear as they would if they were filmed today. It’s very impressive.

It’s worth mentioning that From Russia With Love includes several milestones in franchise. Desmond Llewelyn makes his first appearance as Q. He outfits Bond with a suitcase containing hidden compartments and weapons. It’s the first true Bond gadget of the series and Llewelyn would go on to reprise his role in 16 more Bond movies.

It’s also the first Bond movie to include a pre-credit sequence tease as we’re shown the villain Grant killing a Bond imposter. It’s another moment of near absurdity played to perfection as there doesn’t seem to be a reason for the doomed trainee to be wearing a Bond mask. Finally, From Russia With Love also marks the first appearance of the famed “James Bond will return in…” promise in the end credits. 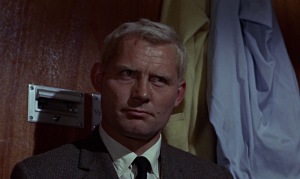 Ian Fleming and Raymond Chandler (5mins 11secs) – A chat between the two writers talking about their process. It’s audio set to pictures of the two writers.

Ian Fleming on Desert Island Discs (5mins 12secs) – Another audio set against pictures. This time the writer talks about his life.

Animated Storyboard Sequence (1min 28secs) – A storyboard of the boat chase scene from the movie.

Ministry of Propaganda – Theatrical Archive, TV Broadcasts & Radio Communication – A thorough collection of all the promotional material for From Russia With Love.

Buy the individual “From Russia With Love” blu-ray here. 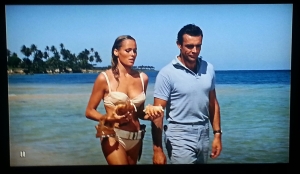 These first two blu-rays have really set a great standard for the rest of the set. I’m curious to see if any corners were cut in the restoration department for the later movies. I hope the care that went into these early movies is indicative of the rest of the set.

So which of these two Bond movies did I like more? Wristwatch garrote to my throat, I’d have to say From Russia With Love.

You can buy the Bond 50th Anniversary blu-ray collection here. 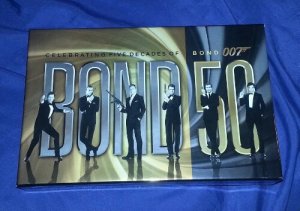