Editorial: The Walking Dead (Rising from Mediocrity, Shambling into Greatness)

The zombie genre often raises interesting questions. How would we behave if society as we know it was gone? How far are we willing to go to protect our own and when the teeth are closing in, what or who are we willing to sacrifice? These are themes The Walking Dead has played with since day one and things are […]

The zombie genre often raises interesting questions. How would we behave if society as we know it was gone? How far are we willing to go to protect our own and when the teeth are closing in, what or who are we willing to sacrifice?

These are themes The Walking Dead has played with since day one and things are quickly coming to a head as the show soon ends its third season. Only two new episodes are left and I feel now is as good a time as any to reflect on where the show’s been and where it’s heading. Let’s start from the beginning…

(Includes spoilers up to and including S03E14 – Prey)

Season one of The Walking Dead played out like a 6 episode pilot. It was a showcase for the brilliance of makeup artist, mad genius (and now executive producer) Greg Nicotero. It was also a way to test the waters for an audience devoid of horror in their television schedules. And to that end, it was a success.

But season one lacked something on a fundamental level. There wasn’t enough worthwhile character development. By the time the season ended, we had Rick, his family and a band of mostly archetypical characters that hadn’t been fully fleshed out yet. Frank Darabont is an incredible filmmaker and has proven he’s gifted at adapting others’ work (Shawshank Redemption, The Green Mile, The Mist). So the shambling start was disappointing. However, I had faith the series would get better. And, eventually, I was right. 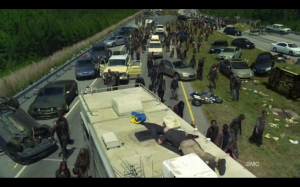 After the lackluster, yet promising, first season, we were given a glimpse of what the show would one day become. The herd of walkers on the abandoned freeway in the season two premiere trumps everything that happened in all of season one. But, yet again, the show stalled.

When the characters got to Hershel’s farm, the show took a 6 episode long detour searching for a lost Sophia. The storyline paid off in the mid-season finale with zombie Sophia coming out of the barn, but the show still needed work. Sophia and Carol weren’t properly developed at that point, so it was hard to care about their plight while it dragged for so long. Her death was a pivotal moment in the series and even now, as I’m writing this, I’m trying to remember if her name was Sophia or Sophie. 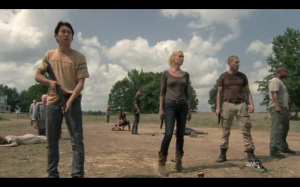 By far my biggest issue with season two involved the barn storyline. In the comics, the debate over the possibility of a cure for the walkers made the characters arguments really compelling. The problems arose when Hershel got preachy about the possibility of there being a cure for the walkers. He presumed that a piece of the zombie’s former, human, self remained and that the apocalypse was temporary. It’s a legitimate thought to have in the post-apocalyptic universe.

However, not a single mention was made about Jenner’s presentation before he blew up the CDC. There was literally a scene in season one where Jenner showed the characters indisputable proof that the part of the brain that makes people human is gone in the walkers. Yet, no one thought to offer up that piece of vital information during the multiple episodes spent debating keeping the dead relatives locked in the barn. It was frustrating beyond belief. It almost reached the point where I gave up on the show.

The prisoner at the farm in the second half of season two wasn’t much better. It felt like the writers watched the Ben Linus/Henry Gale arc of Lost and figured they’d follow suit. Much like Sophia’s barn vacation, it was a disappointing run of episodes that paid off with a well placed death. Having read the comics before watching season two, I couldn’t help but wish the kid had been from Woodbury and that Shane murdering him would kick off the gang’s troubles with the Governor. Oh well.

The latter half of season two was where the show finally got its footing, though. It was also around this time that Glen Mazzara took over as showrunner. He guided the audience as Rick and Shane’s conflict reached its incredibly satisfying conclusion. I still think the way the show handled Rick and Shane (and Carl) was actually better than the book.

Under Mazzara’s leadership, the show delivered on its promise. The second season finale played out like the best parts of a well-crafted zombie movie rolled into one 43 minute episode. When Michonne showed up in the woods and saved Andrea, I literally screamed with joy. The season two finale ushered in a new era for the show and I was very eager to see what happened next. 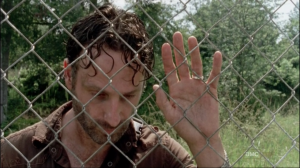 The premiere of season three did not disappoint. The silent cold open, where Bad Ass Carl and the now seasoned survivalists sweep a house for supplies, was expertly crafted and set a strong tone for the season. It was clear the show was taking the momentum from the end of season two and refusing to let go of it.

A few episodes later, the writers symbolically “cleaning house” by killing off the two characters causing the most fan outcry further improved the series. While the generically named T-Dog was guiding Carol through the tombs to safety he referenced that it was God’s plan for him to die that way. All I thought during that scene was, “Hmm, T-Dog’s religious. I’m glad they gave him something.” The writers never did much with the character and, as a result, he just didn’t work for me.

This was also the perfect time to kill Lori. The way it was handled was the best way for the show to do it. Carl shooting his dead mother while a baby joined the group was a major turning point for the series.

Season three introduced three major characters from the comics. The Governor, Michonne and Tyreese. I love what they’ve done with the Governor. Even though he’s not as brutal as he is in the comics, his charming brand of “politician evil” is really fascinating to watch play out. David Morrissey plays him incredibly well and really makes the role his own.

Michonne is great as well. Although, since they toned down the Governor’s evil considerably from the comic, Michonne’s hatred for him in the midseason finale lacked some of the emotional impact it could have had behind it. Having now seen the Governor’s torture chamber in Prey, however, I’m hoping they are going to go all out and show us what the Governor is truly capable of in these last two episodes.

Tyreese’s entrance into the show is hit or miss with me. I was really happy with the casting of Chad L. Coleman, since I’m a big fan of his work on The Wire. I wanted him and Rick to form their co-leadership bond from the books immediately. But I’m warming up to the way they’re developing him in the show, especially after he got more screen time in Prey. I imagine next season will bring him and Rick together. Their relationship is one of my favorite parts of the comics.

Then again, they could “pull a Dale” with Tyreese and kill him off in the next episode. Ultimately, that’s what I love about this show. It’s tense and it doesn’t follow the source material exactly. It’s brilliant in its unpredictability and fresh in the way it’s handling the characters. It’s a just unfortunate that we had to wait this long for it to get this great. 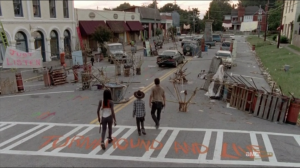 Glen Mazzara took the show from a troubled start and gave it a forceful kick into high gear. So it’s really disappointing to know that he won’t be steering the ship in season four. The future of the show has me worried and, even though I know Mazzara isn’t solely responsible for the heightened quality, he was still the face of the show.

At first glance, Gimple’s writing credits are a little discouraging. He wrote the Ghost Rider: Spirit of Vengeance script and, on the TV side, he worked on two shows that were canceled in their first season. FlashForward was the most disappointing show in recent memory while Drive was a fun enough show that fell victim to a failed Fox scheduling experiment.

But I won’t hold previous credits against Mr. Gimple simply because he wrote this season’s incredible 12th episode. Clear was not only the best written episode of the back half of season three, it is the best episode the show has aired to date. It’s heartbreaking and shocking. Lennie James reprising his role of Morgan from the pilot episode is some of the finest acting I’ve seen in the series. It’s truly haunting and exactly what I look for in a zombie drama. I’m a huge fan of Glen Mazzara but Clear gives me more than enough reason to not second guess Gimple’s rise to showrunner.

We now have two episodes to go in season three. Who do you think will be left standing or shambling by the end of the season? What are your thoughts on Glen Mazzara, Scott Gimple and the shake-up going on behind the scenes? 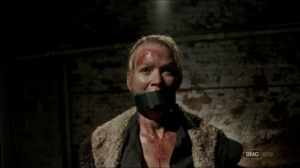