Skip to content
Editorial: Could Under the Dome Be the Next Lost?
Editorials

Editorial: Could Under the Dome Be the Next Lost?

First and foremost, I admit this is a ridiculous claim and I am being slightly facetious when I make premature comparisons to Lost with a series I haven’t watched yet. Besides, Lost had so many contributing factors tied to its success, that it would be difficult, maybe impossible, for network television to have a serialized show capture the hearts, […]

First and foremost, I admit this is a ridiculous claim and I am being slightly facetious when I make premature comparisons to Lost with a series I haven’t watched yet. Besides, Lost had so many contributing factors tied to its success, that it would be difficult, maybe impossible, for network television to have a serialized show capture the hearts, minds and imaginations of so many viewers and “armchair showrunners.”

The timing of Lost had as much to do with its success as its writing, acting, directing and producing. There was a void in television for an engaging, mystery-driven character piece that would leave audiences talking and theorizing in the days between each new episode. The emergence of blogs and internet forums in the early 2000s created and sustained the hype machine that was Lost’s most dedicated viewers.

I am a Lost fanboy through and through. So when I posit that Under the Dome could be the next Lost, I don’t say it lightly. I didn’t tout any of the dozens of network attempts at recreating the serialized magic (and viewer numbers) of the tropical mystery behemoth. The problem I’ve seen with network attempts to recapture “sentient smoke” in a bottle, is an emphasis on mystery. I haven’t seen any of them do the one thing that Lost did best; create rich and interesting characters, pit them into an extraordinary situation and then develop them.

So why do I think Under the Dome has a chance to buck this trend? Because of its source material.

In my (admittedly mistitled) “Dos and Don’ts of Adapting King” post on Monday, one of my main points about King’s writing was his character development. He has a knack for creating well-rounded, ordinary characters and putting them into extraordinary situations and seeing what they do.

At its heart, this is what Lost was truly about. In fact, the Lost writers always had copies of Stephen King’s The Stand in the writers’ room. They used a lot of elements from The Stand as a template for Lost’s narrative style and characters. 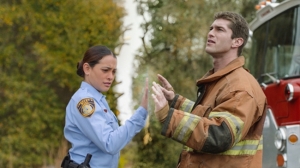 Under the Dome’s source material is really great. The characters are fascinating and their personal growth, while not in the same arena as The Stand and The Dark Tower, is some of King’s best work post-accident. The novel is also paced spectacularly well. The characters were so well written and the story so interesting that the book was really hard to put down.

In addition to having strong source material to draw from (something Lost didn’t have), Under the Dome is under the leadership of Brian K. Vaughan. Not only is he very well known in the graphic novel world, he’s a veteran producer and writer from Lost. Taking what worked in Lost and working them into a series with 13-episode season orders while also drawing from a Stephen King novel is a recipe for a great television series.

The only thing that stands in the way of that is network pressure. But CBS did something unique with Under the Dome. The network sold the series’ streaming rights to Amazon while riding the Stephen King hype to sell the series to over key international markets . Before the network even had a pilot to show international executives, the show was already profitable. This should give the show more room to find an audience.

So hopefully the show is good.

I don’t know if I believe there will ever truly be another Lost. If anything, the water cooler aspect of watching it live has died as DVRs and digital downloads make watching a series on your time a commonplace practice. Not that I’m complaining, I’ve espoused my approval of Netflix’s war on scheduled programming before.

I just need to be content in the knowledge that Lost may have been the last “event programming” series on network television. But I will still be rooting for Under the Dome.

Do you think Under the Dome can break away from its failed serialized counterparts? Leave a comment and let me know what you think. You can also find me on Twitter @ObsessiveViewer and Facebook at The Obsessive Viewer.