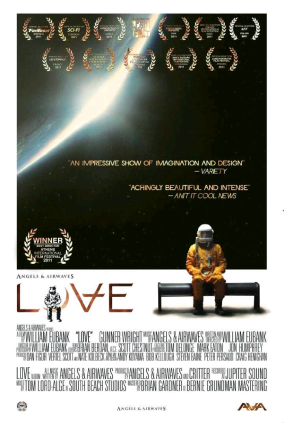 I talked about this movie a couple weeks ago on the Podcast. I figured I’d go ahead and recommend it.

The trailer for Love didn’t do anything for me when I saw it a couple years ago. Particularly the line “If you guys are doing some kind of isolation test, or stress experiments, well then you can stop now because… because I’m very isolated and very stressed!” In the trailer it comes across as laughably flat and awkward by star Gunner Wright.

I’ve also had a back and forth relationship toward producers and score composers Angels & Airwaves. For the most part I like them a lot but sometimes I think a song shouldn’t have a minute and a half long intro. I’m old fashioned that way, I guess.

The movie is about a lone astronaut on the International Space Station who loses contact with Earth. He spends his isolation slowly losing it while, somehow, also pondering life’s greater mysteries. It’s an interesting premise and the payoff is polarizing in a “you’re going to really like it if you’re not too put off” kind of way.

I had a friend say the trailer looked like an Angels & Airwaves music video without even knowing they had anything to do with it. So if you want to know what kind of visuals you have to look forward to, YouTube them.

According to IMDb the movie had a $500,000 budget to work with. The end result is an interesting movie that’s a little too in love with its central theme and borrows just a little too much from 2001: A Space Odyssey. Still, for the budget, the visuals aren’t bad and it can be thought provoking if you let it. It’s not a horrible way to kill 80 minutes of your time.