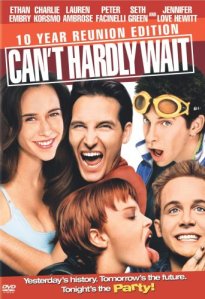 In honor of my planned trip to the theater today to see The To-Do List, this week’s streaming saturday recommendation is a 90’s teen graduation party movie!

I didn’t realize Can’t Hardly Wait was on Netflix! Not that it matters, though. I own two copies of the DVD. I love this 90s teen party movie! I can’t speak highly enough about it. Ethan Embry plays Preston Myers. Through four years of high school he’s pined after Amanda Beckett. Right before graduation, her boyfriend dumps her. Now Preston has one night to face his destiny at a graduation party and tell her how he feels.

There are a ton of other threads to this movie with subplots galore and a very strong ensemble cast. The script is hilarious with great pacing. I’ve watched this movie twice this year already and I have every intention of watching it a time or two more before 2014 rolls around.

If you’re looking for a fun teen comedy that’s densely packed with highly quotable, hilarious jokes and memorable plotlines that will also make you nostalgic for the 90s, Can’t Hardly Wait is what you want to see. If you’ve already seen it, watch it again. It’s got a very high rewatchability factor. Not to mention, the soundtrack is great.