I feel like I was a little hard on the show last week. I want to reiterate that it was a good episode but the similarities to Lost were obvious to the point of being distracting for me. I also want to say that Under the Dome season 1 now has a home video release date. It’ll be released on […]

I feel like I was a little hard on the show last week. I want to reiterate that it was a good episode but the similarities to Lost were obvious to the point of being distracting for me.

I also want to say that Under the Dome season 1 now has a home video release date. It’ll be released on November 5th on DVD, Blu-Ray and a collector’s edition Blu-Ray set. You can preorder it by clicking the corresponding links in the previous sentence. I think it’s interesting that it’s releasing so soon. It’s an interesting way to combat piracy.

But enough about that; here’s my review of the episode. As always,  BEWARE, MAJOR SPOILERS

This week on under the Dome, Team Rennie and Team Ollie resorted to all out war over the town’s only remaining water source. Meanwhile, Joe proved he is the worst at keeping a secret while Norrie mourned the loss of her mom.

I want to say first off that I was way off base last week with my theory about the Dome bringing Alice back to life, leading the town to worship the Dome as a deity of some kind. In retrospect, that probably would have stretched the bounds of believability. It would be doable, yes, but I don’t think UTD’s writers would be capable of pulling it off without being corny.

I liked this week’s episode, though. Junior and Big Jim were at odds from the episode’s opening scene. It gave us some good background on their history and, more importantly, the episode disclosed what happened with Junior’s mother. Explaining her car accident (and Big Jim’s cover up to prevent Junior from learning it was a suicide) was my favorite part of the episode. Hats off to Dean Norris for his performance this week.

Norrie and Angie became buddies this week. That was fine with me. I like seeing Britt Robertson with more scenes. The snow globe element wasn’t as distractingly on the nose as it could have been. I thought it was a little too sudden that Norrie broke down upon seeing the LA snow globe, though. Call it a fault in editing, acting, directing or writing, but something seemed off in the final product. 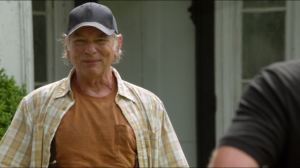 I enjoyed the confrontation between the deputies and Ollie’s men. That scene and the all out battle were pretty good sequences. However both were a bit marred by Junior. I’ve given Alexander Koch eight episodes and I still can’t help but feel like it’s a waste of what could be a great character. Koch just didn’t impress me that much this week. I think this late in the season, I’ll cut my losses with him and quit hoping for the best. 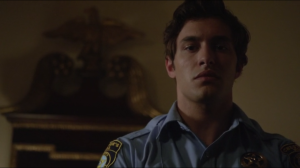 Another low point of the episode came in arguably the best scene of the episode, oddly enough. The scene where Junior had Big Jim at gunpoint was very well acted by Norris. However, the moment Ollie grabbed the gun to shoot Big Jim, the scene fell apart for me. I don’t know how to explain it, except to say it was mostly subpar editing at fault. When Ollie says his last line, it came across as hokey and really forced.

Speaking of Big Jim, I’m intrigued by the writers’ choice to play up his more sympathetic personality traits and motivations this week. Maybe it was to surprise us in that final scene with Barbie? Or was it just to establish his and Barbie’s new adversarial relationship? In any case, it was an interesting choice and I’m glad Barbie saw through it. I’m hoping for some really good interactions between the two in the run up to the season finale.

Joe is the worst at keeping secrets. It’s been a day and he already spilled the beans on the mini-Dome. It’s all well and good though because I enjoyed him taking Julia to it. “The monarch will be crowned” is an ominous and disturbing message from the Dome. I feel like it’s a warning of things to come when Big Jim makes his rise to power.

All in all it was a good enough episode. It wasn’t their strongest yet. I’ve said before that I enjoy seeing the town go to hell. I just wish Chester’s Mill’s downward spiral was a little better paced. Instead of having one episode be about the town and the next be about the mystery of the Dome, I wish the show would intertwine everything a little better.