In this week’s penultimate episode of Under the Dome’s first season, Big Jim took full control of Chester’s Mill and exploited their fear of the Barbie he led them to believe was a threat. Elsewhere, Julia took a nap, Junior became somewhat tolerable and Joe and Norrie hid the mini Dome. MAJOR SPOILERS AHEAD “Exigent Circumstances” began with a surprisingly […]

In this week’s penultimate episode of Under the Dome’s first season, Big Jim took full control of Chester’s Mill and exploited their fear of the Barbie he led them to believe was a threat. Elsewhere, Julia took a nap, Junior became somewhat tolerable and Joe and Norrie hid the mini Dome.

“Exigent Circumstances” began with a surprisingly decent town hall scene in the diner. Big Jim led the enraged Chester’s Millers to approve a police state and house-to-house searches for Barbie. It’s a bit of a stretch, now that I think about it, but in the moment I was on board.

I particularly liked the line Jim gave to Linda when she questioned the situation. “It’s not me, Linda. It’s the people.” I hope Linda sees through his BS soon. I’m sure she will see Jim for what he is and put a stop to the persecution of Barbie. That’s most likely what will happen next week.

Dodee’s interception of the military signal made me wonder if maybe the military has someone inside the Dome. It’s a bit of a reach, sure, but knowing about the mini-Dome and keeping tabs on Barbie makes me think they’ve got a contact in Chester’s Mill. It’s more likely that they are using satellites to observe life under the Dome like Big Jim said. But as a viewer, I’ve been trained not to believe James “Big Jim” Rennie.

My distrust of Big Jim was rewarded when he murdered Dodee. How many characters have died by his hand this season? 5? Maybe 6? It’s a high number, for sure. It makes me wonder what they have planned for next season. Chester’s Mill is a small town. Soon enough, Jim is going to run out of targets.

As far as Dodee’s exit from the series is concerned, I thought it was the high point of the episode. Let’s face it, a lot of characters have died. The second Dodee overheard that Big Jim murdered Coggins, she was a goner. What I liked about the scene was the slow build toward her death. She pleaded for her life by swearing to be useful to Jim. When she realized he wasn’t having it, she dropped the act and told him off. I thought it was a really good scene.

On the other side of the spectrum, we have Barbie’s run from the growing militia of angry Chester’s Millers. This plot showed a lot of promise last week. This week it delivered for the most part. His attempt to get Julia to safety was a little nuts, considering she was unconscious in a hospital bed. But that wasn’t the big problem I had. 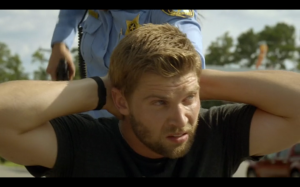 The biggest issue I had with the episode was the same problem I’ve had with most of the recent episodes. Barbie loads Julia into the ambulance driven by Angie. He leans down and (in a rather creepy tone) whispers, “I love you” before surrendering to Sheriff Linda.

It just bugs me so much that we are supposed to buy into their relationship. It bothers me even more to think Barbie is actually in love with her. I just want to go into my TV and ask Barbie, “Why? Why do you love her? Is it because she’s okay with you killing her husband and burying his body in an unmarked grave? Or is it because she slept with you a few days after you met?” It’s frustrating and I’m repeating myself.

As solid as I thought this episode was, not a lot else stood out. Joe and Norrie hiding the mini-Dome and standing up to Big Jim was decent, I guess. It was a reflection of Big Jim being in absolute control of the town.

The end scene with Barbie pleading “not guilty” was a silly cliffhanger. If it wasn’t for the bizarre mini-Dome/egg hatching thing, I would have laughed it off.

I’m not sure what I expect from the season finale next week. I don’t have a clue what the pink stars are or what’s going to come out of the egg in the mini-Dome. But I’m still intrigued.

Let me know what you thought of “Exigent Circumstances.”

Season 1 will be released on November 5th on DVD, Blu-Ray and a collector’s edition Blu-Ray set.