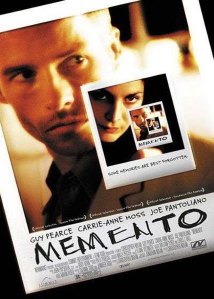 In honor of yesterday’s episode of The Obsessive Viewer Podcast, this week’s Streaming Saturday is the Chris Nolan mind bending noir film Memento. Before I get to talking about Memento, though, I want to briefly promote yesterday’s episode of the podcast. It was Part 1 of our 2-part episode discussing Christopher Nolan. I edited it “Memento-style” and it’s gotten a lot of positive feedback. So if you’re a Nolan fan, you should check it out and let me know what you think.

Deluxe 2-disc DVD set with bonus version in chronological order. A point of pride in my collection.

Making its rounds on the festival circuit in 2000 before its release in 2001, Memento was Chris Nolan’s second movie (read about his debut here) and it’s without question one of my favorite movies. It’s one of the most inventive and mind-bendingly clever movies I’ve ever seen. Memento is the rare movie where every viewing changes your perception of the story being told. Whether it’s a small adjustment or something substantial, every viewing feels like a new experience. It’s a very unique experience.

Memento tells the story of Leonard Shelby (Guy Pearce). He’s a man hunting his wife’s killer. The twist, however, is that Leonard has no short-term memory. His last memory is of his wife dying. To mimic Leonard’s condition, Nolan brilliantly tells his story in reverse. We watch the end (well, end-ish) of the movie first and then watch in reverse order the path that Leonard took to get to that point.

With this style, we get introduced to characters Leonard is meeting for the first time, for the umpteenth time. We experience the confusion and the manipulation being played by several characters. To ease the viewer into this peculiar narrative structure, clips of Leonard on the phone in his hotel room separate each scene in chronological order.

It’s a truly unique and brilliant movie that I urge everyone to experience at least two or seventy times.

One response to “Streaming Saturday: Memento (2000)”