Here’s this week’s installment of “The Obsessive Viewer’s Week in TV!” This week was a little light, compared to last week at least. A lot of that is due to the kick off of Shocktober and various other things. Still, I managed to watch the series finale of Breaking Bad, Family Guy’s season premiere and start a rewatch of Game […] 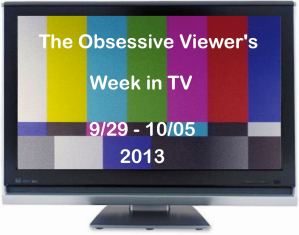 Here’s this week’s installment of “The Obsessive Viewer’s Week in TV!” This week was a little light, compared to last week at least. A lot of that is due to the kick off of Shocktober and various other things. Still, I managed to watch the series finale of Breaking Bad, Family Guy’s season premiere and start a rewatch of Game of Thrones. Read on to see what kind of week I’ve had.

This section covers the episodes I watched of shows that aired a new episode this week. 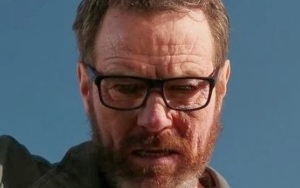 Shameless plug time: You can hear all my thoughts (as well as Mike and Tiny’s thoughts) about the series finale of Breaking Bad on the final part of The Obsessive Viewer Podcast’s trilogy of Breaking Bad bonus episodes. We had a lot of fun recording these episodes wherein we discuss and react to each of Breaking Bad’s final 8 episodes individually.

In the podcast, I mentioned that I wasn’t too sure about the end of what I believe to be one of the best series in television history. I felt strange knowing that Walt essentially “won” in the end. He got to provide for his family, he got to avenge a loved one’s death, he got to forgive Jesse and free him all before he finally died essentially on his own terms.

It kind of rubbed me the wrong way. I liked the finale overall, I just felt like Walt, the antihero that he is, should have faced a harsher punishment for his actions. I just felt like he didn’t quite earn the triumphant death at the end of the series.

Those were my initial thoughts.

I’ve given it a week and contemplated the ending some more. I rewatched the episode and that’s when I gained a slightly new perspective on the series. I had been viewing the series as a whole as a character piece in which a mild mannered, “good” guy transforms into an evil, villainous monster.

That’s not entirely it. The series was about change of all kinds. You can mark the various degrees of Walt’s transformation but it’s not necessarily a strict progression from good to evil. If you were to map Walt’s change, it would yo-yo. He riches the Heisenberg apex when he murders Mike, but the road to that moment is a bit back and forth.

He wobbles a little bit after Mike’s death. The end of Heisenberg comes when Hank dies. Walt is directly responsible and, as he goes into exile, he becomes this meld of Walt and Heisenberg. The last two episodes of the series feature the final incarnation of Walter Hartwell White, as he ties up his loose ends and reaches a point of inner peace.

It was a satisfying finale. I think knowing that it’s not a strict transformation from good to evil makes it easier to appreciate the finale. I’ll have more thoughts about it when I rewatch it, I’m sure. For now, I’m happy the show went out on top. The series will live on in the minds of the viewers and in the endless discussions of it. It was truly a great piece of television.

This week we were given a rare glimpse into a side of Arnold Rothstein we hadn’t seen before as he gambles away an obscene amount of money in a game of cards with an anti-semite. Meyer Lansky also had a big episode. I love the way Anatol Yusef plays that role.

Elsewhere we got some more of Van Alden. This week O’Banion sent Van Alden to the Capones. That didn’t end too well for one of O’Banion’s men. I really hope this storyline takes off from here. I really want Van Alden to transform into a gangster.

Dr. Narcisse’s power grab for Dunn Purnsley appears to be going well. I hope Dunn and Chalky are playing Narcisse because it’s a little hard to believe Dunn would turn on Chalky that easily.

The investigation storyline has me nervous. They have so much on the Thompson organization that I’m really nervous about how they’ll make it out of it. I’m very curious if Eli’s son’s storyline is going to come into play. I wonder if Hoover will get a hold of him and cause Eli to flip on Nucky. We’ll see, I suppose. This is shaping up to be a really good season.

Coming off the heels of the spectacular season premiere (which I mentioned on the podcast last week), How I Met Your Mother went somewhat back to normal within the confines of their new format. It felt familiar but overall it could have been more satisfying.

One of the things I loved about the premiere was the use of flash-forwards to finally show us Ted and the Mother together. While I won’t argue that the show needs to have something like that every episode, in fact, it would be catastrophic for the storytelling, it was missed.

There was no Mother and no flash-forwards to “Happy Ted” in this episode. Having been blown away by last week’s ending, I just wanted more of that in every episode. But when I get over those absurd feelings, the episode was still solid. There wasn’t enough of Marshall and the Lily and Ted storyline (which drove the episode’s main plot) was sweet.

The ending has me very curious what is going to happen with Ted and Barney.

Peter goes on a treasure hunt with a kids’ restaurant placemat as his treasure map.

This was a strong episode, compared to the show’s recent history. Family Guy has been hit or miss for the last few seasons. The show is pretty much background noise for me. It’s what I fall asleep to and what I play in the background while I’m doing work.

So the fact that Finders Keepers held my attention at all gives the episode a high grade with me.

I’m nearly always rewatching a series, catching up on a show I’m behind on or going through a show I’ve never watched before from the beginning. This section is devoted to those viewings.

The Parks and Rec team went to London! I liked the premiere. Ron Swanson experiencing Europe was great comedy that led to a nice poignant moment at the end of the episode.

Speaking of which, his marriage was kind of surprising but in keeping with the character. I loved Leslie’s reactions at the wedding.

It was great seeing Peter Serafinowicz guest star. Though I feel like the “professional guy stressed by the childish guy at a business meeting with an equally childish businessman” is a really tired concept. 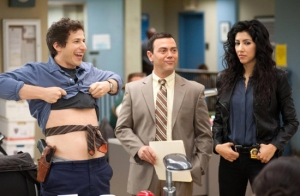 I watched this at the insistence of my brother and was very pleasantly surprised. Andy Samberg’s role as a childish detective brings a silliness to the show that carries throughout the entire pilot. I’m really excited to see where this series goes. It looks like it will be a lot of fun. Hopefully it stays around.

There are some good episodes in this batch. I didn’t finish the season like I planned but I’m hoping to get completely caught up this week. Schmidt is still my favorite character.

I wanted to watch more than just two episodes but I was busy this week. I watched the first episode with the interactive guide enabled. It was a really cool experience. When the video icon blinks on the HUD on the screen, it takes you to a really cool animation with a voiceover by one of the characters giving insight into a particular part of the show.

It’s a really interesting feature and can add to the experience. But the second episode repeated a few things and I turned it off. So I assume it repeats a lot throughout. It’s still a cool feature.

Of course the picture and sound are incredible. They’re worth the price of the set alone. 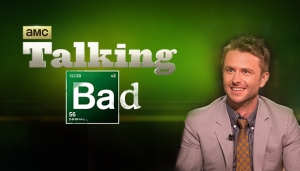 Watching all of the Talking Bad episodes in a row was maybe a bad idea. I am a huge fan of Chris Hardwick, but these post-show talk shows are designed to be watched after their episode aired. Watching them in bulk just got kind of boring. I didn’t even watch the final one. I may eventually.

Conan O’Brien is great. I’ve been a fan for a long time now. It was great seeing him devote an entire episode to celebrating Breaking Bad. The Breaking Bad sketches they played before the interviews were just okay.

The actual interviews were great. Everyone seemed comfortable and at their funniest. Here’s the standout clip from it:

Here’s where I throw in anything TV-related that happened this week that doesn’t fit in the sections above and/or isn’t big enough to call for its own blog post throughout the week. 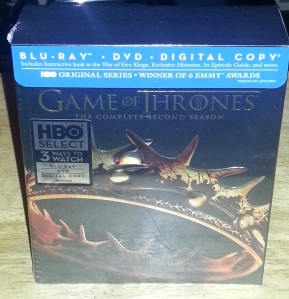 I honestly wasn’t planning on buying this until after I finished rewatching season 1 and finished reading book 2 of A Song of Ice and Fire. But, I got an extra $30 from Nielsen ratings (I’ll write about it soon, for sure) so I decided to spring for the season 2 box set.

I haven’t checked out any of the special features but they really look extensive. I’m eager to get to them.