Television has long had a tradition of “water cooler moments.” They’re scenes or whole episodes where some big game changer happens and the audience is left in such a state of awe, they immediately discuss it at the water cooler at work the next day. Even though DVR and Netflix, not to mention Internet communities and social media, have significantly […] 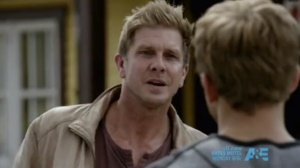 Television has long had a tradition of “water cooler moments.” They’re scenes or whole episodes where some big game changer happens and the audience is left in such a state of awe, they immediately discuss it at the water cooler at work the next day.

Even though DVR and Netflix, not to mention Internet communities and social media, have significantly decreased the prominence of “water cooler” discussions, television storytelling still has its share of shocking and twisted moments for the fans to go crazy about.

This week’s episode of Bates Motel delivered one such shock and I was not expecting it. Read on for my breakdown of season 2, episode 3: Caleb.

And make sure you check out my hub of Bates Motel content.

Last week’s episode ended with a look at Norma’s estranged, rapist brother played by Kenny Johnson (of The Shield fame and, again, watch that show; it’s incredible). Given the exposition established in last season’s finale (that Norma was raped by her brother for several years), his appearance on the show promised a lot of really good tension and drama.

This week the writers decided on a nice, slow burn toward a very surprising (for me) plot twist in the closing moments of the episode.

What I loved about the Dylan/Caleb dynamic set up early in the episode was that their scenes felt very organic. Dylan doesn’t understand why Norma is so adamant about never letting Caleb back into her life and his deep-seeded resentment of her gets the better of him. His natural instinct, given how closed off Norma has been his entire life, is to try to bond with his uncle. This episode played well off of Dylan’s curiosity/complete lack of knowledge about his family.

I’ll get to the twist ending in a bit, but first let me talk about the rest of the episode.

Norma made lost her shot at theater stardom but gained a friend as a consolation prize. Between the pretty bleak tones of the show and the overly suspicious nature of White Pine Bay, I was instantly questioning Norma’s new friend’s motivations. I hardly think she was so impressed by Norma’s audition that she had to befriend her. The way she’s pushing her brother on him and the inclusion of Michael O’Neill‘s shady character at the party make me think something morbid is afoot in the “real White Pine Bay.” 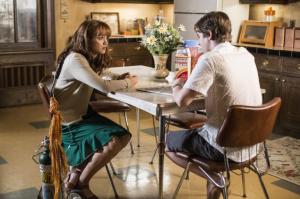 It was great seeing more of Emma this week. Her feelings about Bradley’s faux-death was good for the character and the beach party/memorial worked as a device to get certain characters in certain settings and situations. But I was left wishing that Emma’s arc was more integral to the main plot. Right now she’s kind of a superfluous character that the writers seem to be struggling to keep relevant.

Instead of developing Norman’s relationship with Emma further, they’ve introduced a new love interest in the form of chatty cashier/theater tech girl Cody. She’s been in two episodes and already I’m a fan. She’s such a different breed from Norman, I think they’ll have really good chemistry in the episodes to come. I mean, until Norman murders her…probably.

The ominous way she talked about her dad makes me wonder if Cody is a victim of abuse. It would be kind of “easy” for the show to have Norman murder a girlfriend’s abusive dad but I wouldn’t be surprised if this is where the plot is headed. Not that I’m complaining. I’m sure the writers would make it interesting.

Before the twist at the end, the highlight of this episode for me was the scenes between Dylan and Caleb. When Dylan first talks to him outside, before they go on their man-date, I was really impressed with how the scenario was laid out. Dylan latching onto Caleb was a very organic way for the character to grow and for the writers to go down some new and interesting avenues.

The scene at the end of the episode between Dylan and Norma was really great. Vera Farmiga proved once again that her talent is on another level from everyone else on the show. And when Norman came in, I honestly wondered for a moment if Norman was going to kill him.

But that wasn’t the case. Instead, Norma revealed that Caleb is Dylan’s father. This shocking plot development blew me away a little. I honestly just wasn’t expecting it. I’m curious how this will reverberate in the episodes to come but for now I’m floored by the way the writers handled such a big moment in the series.