Today Dawn of the Planet of the Apes opens in theaters across the country. Unfortunately, due to some poor timing, I have been forced to celebrate its release with a review of Tim Burton’s 2001 remake. As always, you can find an index of my Apes reviews here and also check out The Obsessive Viewer Podcast here. Now, here’s my review of Burton’s train […] 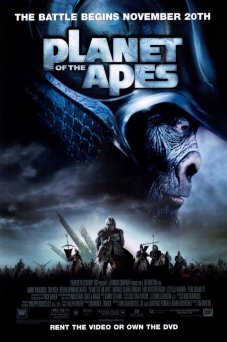 Today Dawn of the Planet of the Apes opens in theaters across the country. Unfortunately, due to some poor timing, I have been forced to celebrate its release with a review of Tim Burton’s 2001 remake. As always, you can find an index of my Apes reviews here and also check out The Obsessive Viewer Podcast here. Now, here’s my review of Burton’s train wreck.

Before I get into the meat of my review, I do want to commend Burton for creating something unique. This isn’t a Gus Van Zant Psycho type of remake. Tim Burton actually made his own uniquely Burton iteration of Planet of the Apes. Unfortunately, that is exactly what caused this movie to falter so grandly and spin out of control to the point that it’s embarrassing. 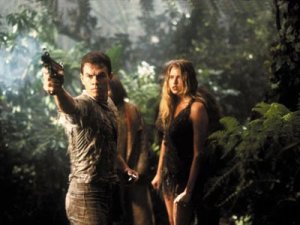 While Burton did create something that stands alone from the 1968 classic, in doing so he also avoided every thing that made the original so iconic and splendid. The debate about evolution and religion is all but absent in this remake. Religion plays a somewhat minimal role, but I can’t help but think it was included specifically to pay lip service to the fans of the original movie. The humans are not the devolved, mute creatures of the original either. They’re fully developed, largely ordinary people, which offsets the depiction of the apes considerably.

The apes themselves are an awkwardly over the top misstep in every sense of the term. They are far too animalistic to the point that you’re left wondering just how evolved they truly are. They are temperamental and often act erratic and aggressive when the situation doesn’t call for it. I can sort of appreciate that Burton probably wanted them to seem more menacing and formidable for the sake of tension (and to an extent, they are). But it goes so far against the almost mystic tone of the original that it collapses upon itself and becomes laughable and awkward. They simply aren’t “human” enough. 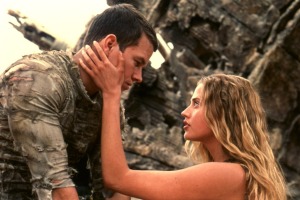 This feels like a Tim Burton movie and not a Planet of the Apes movie. The setting looks more like it exists in Burton’s token dreamscape. While watching it, I was left feeling like I was witnessing something set in a place that’s hollow and unreal instead of being enveloped in the world run by apes like the original (and even Battle) made me feel.

The movie starts on a space station that benefits from what I assume must have been most of the visual effects budget. The exterior shots of the station look great until anything is introduced into the foreground of the scene. Then the illusion falls apart and the movie is left with very outdated visuals. 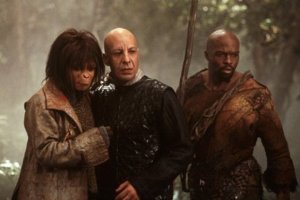 Making the lackluster effects even worse is how needless this prologue is in the greater scheme of the movie. It plants a couple of seeds that are book ended by the time the credits role, but the prologue also includes unnecessary things. Characters are introduced as important parts of Wahlberg’s character’s life and never referenced again. Even from a character building perspective they squandered an opportunity to build Wahlberg’s character arc around what the opening prologue showed. Instead, we get a couple scenes establishing Wahlberg’s character and then nearly two hours of bland one-dimensional anti-characterization.

The script as a whole is godawful. There’s a line in the prologue that made me audibly groan. The humans on the space station launch an ape in a pod to investigate a storm in space. They lose the pod and Wahlberg gets in his own pod and says “Never send a monkey to do a man’s job.” Groan.

The script pays sloppy, uncreative tribute to the original in a couple of scenes. Two of the more iconic lines of dialogue spoken by Heston in the original are repeated in this iteration by apes. It made me cringe and the role reversal of the speakers of the lines left a sour taste in my mouth. It felt like the screenwriter responsible wanted to piggyback off the legacy of the original in an attempt to be clever and missed the mark entirely.

Mark Wahlberg’s monologue to rally humans into fighting back in the climax is half-hearted, stilted and cliche-ridden. I cared for none of the characters to the point that I didn’t bother to commit Wahlberg’s character’s name to memory. The script also includes a Rodney King “can’t we all just get along” reference that’s incredibly hokey and awkward.

The movie ends somewhat well, compared to the rest of the movie. There’s a twist on the twist ending that’s actually not horrible. However, it doesn’t excused the hour and 50 minutes that precedes it.

All Tim Burton accomplished with his remake is that he made a movie that shows how ridiculous the premise of a planet ruled by apes could potentially be. I can’t imagine anyone who holds a flame for the 1968 original or its four sequels could justify what happened in this movie. If not for the semi-passable ending, 2001’s Planet of the Apes would have been irredeemably bad.

Obsessive Grade: Catch it on TV

You might get a modicum of entertainment out of this if the network it’s on plays decent commercials with it. 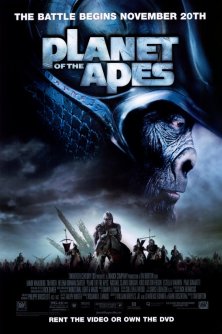