Apes Franchise Review: Part VII – Rise of the Planet of the Apes (2011)

The franchise returns after a decade with director Rupert Wyatt‘s prequel/reboot Rise of the Planet of the Apes. James Franco stars as Will Rodman, a medical researcher trying to develop a cure for Alzheimer’s and save his dad (played by John Lithgow) from the disease. Following a lab incident, Will gains possession of a newborn ape with heightened cognitive abilities. Will raises Caesar the ape (Andy Serkis) and then everything goes to hell from there. 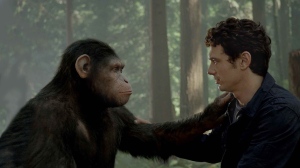 James Franco is a pretty hit or miss actor for me. For every hilarious comedic role, there’s Spider-Man 3. For every 127 Hours there’s, well, Spider-Man 3. Franco does a fine job as Rodman in Rise, though. He’s believable as a scientist and hits the right chords with the emotional points in the movie.

John Lithgow delivers a bit of a heartbreaking performance as his character struggles to cope with his Alzheimer’s. It gives the movie a weighty emotional depth that I really wasn’t anticipating. Of course, it was a very welcome surprise and really brought everything together for me.

Of course, I have to talk about Andy Serkis and the spectacular visual effects in Rise. The mo-cap effects were mind blowing. You can see the range of emotions that Caesar undergoes throughout the movie with more clarity and detail than ever before in motion capture technology. Andy Serkis knocks it out of the park with his portrayal of Caesar. His performance is entirely reliant on facial expressions and non-vocal mannerisms. Andy Serkis’ work in Rise of the Planet of the Apes is an exercise in subtlety. And the finished product is truly a sight to behold.

The pacing and the story itself is smooth as butter. Wyatt managed to get some great easter eggs for franchise fans into the movie without being too on the nose about it. But I think the movie’s biggest success is in its handling of the origin story itself. The story has many threads playing out at once that converge beautifully in the movie’s climactic sequence. It feels organic and believable.

The movie’s ending is where I have a slight issue with Rise. As the apes do what the title of the movie implies, I was struck by how jaw dropping the special effects were. But I was left wanting in terms of the violence on the screen. I’m not a gore fanatic and I don’t need brutality to enjoy a movie. But as the apes begin their rebellion I couldn’t help but feel like it was nearly cartoonish the way they would toss people aside. The near total absence of blood and violence really undermined the emotion and anger behind the apes’ action. In short, it felt like a very safe measure by a filmmaker hesitant to push the boundaries of the PG-13 rating.

That is really my only complaint about the movie. Rise of the Planet of the Apes rejuvenated a stagnant franchise and brought it into the 21st century with style, heart and respect for its source material. I loved it. 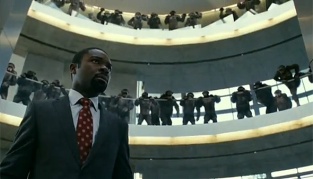