Last night viewers finally had the opportunity to see if the numerous talent in front of (and behind) the camera of A&E’s Psycho prequel/reboot have what it takes to bring one of film’s greatest monsters into the 21st century. Did they succeed or will Bates Motel suffer an early death?

“First You Dream, Then You Die” plays out like the first two episodes of a series condensed into one. We’re introduced to Norma Bates (Vera Farmiga) and her son Norman (Freddie Highmore). Following the death of Norman’s father, the pair set out to make a fresh start in White Pine Bay. Norma has bought a foreclosed house overlooking a rundown motel she plans to reopen with the help of her son. Norman is a quiet 17 year old boy along for the ride. 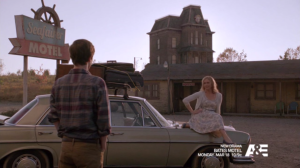 Of course, nothing is as perfect as it seems. Before long, Norma is being hit up for money from an estranged son while Norman is verbally accosted by the home’s drunken previous owner. The episode then takes a sharp thematic turn surprisingly early and leaves the audience with the promise of more shocking storylines to come.

It’s quite an effective pilot episode. It’s suspenseful, shocking and well acted. Vera Farmiga does a terrific job playing Norma, as expected. Freddie Highmore is surprisingly good as well. My only frame of reference for Highmore was his work in The Art of Getting By. I really didn’t like the movie but it made me curious if Freddie Highmore has more range as an actor. The premiere of Bates Motel shows promise in his abilities.

The show is not without a couple of easily fixable problems, though. The bizarre way a group of attractive girls flock to Norman only made me desperately wish my family had moved more while I was a teenager. It didn’t come across as genuine at all and I really hope the writers are setting something up for a later episode. Sadly, however, I feel like whatever could have been set up would have played out by the episode’s end. It didn’t. So we’re left with a lazy introduction to one of Norman’s love interests.

I also feel like not enough time was spent on White Pine Bay. A close-knit community full of secrets is alluded to by the drunken man who comes to the house, but not a lot was shown of the community. Not that the episode could have spared the screen time. Instead of overcrowding an already densely written script, we’re given a promise of an immediate storyline involving the town, presumably in the next episode.

Several strands stay unresolved by the end of the premiere. White Pine Bay could be getting a highway and we don’t yet know what caused Norman’s father’s death. I also see a potential love interest for Norma in the sheriff’s deputy (Mike Vogel) who stops by with the particularly nosey sheriff (Nestor Carbonell).

The premiere sets up plenty of storylines that show the potential for a very strong first season. There are a lot of different directions the show can take from here and I’m optimistic that the people in charge will make the right choices. I’ll definitely be sticking with Bates Motel through its initial 10 episode run. I’m sure it won’t be the last you hear of it here.