Things are moving very fast in White Pine Bay. This week’s installment of the Psycho pre-imagining (I hate me for that too, just roll with it) focused on the town’s shady secrets and introduced us to Norman’s jerk brother. Those were two of the plot points I was eager to see more of in the show and I wasn’t disappointed. (Spoilers ahead)

I had a complaint about the premiere that I forgot to include in last week’s post. So I’ll throw it here. The last scene of the pilot was left a little too vague for my tastes. I wasn’t sure if we were supposed to see it as a flashforward to something Norman does, a flashback to something the town did, a present day scene exposing some hidden part of the house that the Bates hadn’t found yet or if it was simply Norman’s mind imagining the contents of the journal. After the second episode, it still isn’t fully clear to me. But I’m assuming it’s a flashback to something the town’s criminal element is responsible for. Now, let’s get to this week’s offering.

Norman got a kiss and his ass kicked this week. His fascination with the journal he found doing the worst chores imaginable sparked his new friend Emma’s curiosity. She borrowed it, translated it and before long the pair are on a mission to figure out if the journal is true. Meanwhile, Frankie Muniz and Cam Gigandet walked into a teleporter at the same time and out came Max Thieriot, just in time to play Norma’s hostile older son Dylan.

I’m really glad this storyline is getting addressed early in the show. The idea of Norman Bates having a brother made me very curious. This episode didn’t disappoint. Dylan hates Norma, Norma hates Dylan. Norman loves Norma. Dylan hates getting attacked by a kid with a mallet. It’s a rocky set of relationships that is going to provide plenty of good drama, I think. 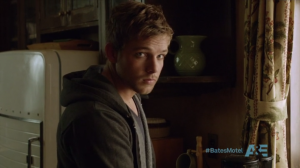 Dylan also helps keep the creepy, overbearing, inappropriate relationship between Norma and Norman at bay for the time being. We got a couple flourishes of it with Norma attempting to cock block Norman by asking how long his girl is going to live. Then there was the scene where Norma changes clothes in front of him but “it’s not like it’s weird or anything.” There’s also the White Pine Bay problems to attend to.

The episode opened with a badly burned man crashing his car near where his daughter and Norman are conveniently located. Dylan then meets one of the burned man’s employees at a strip club and gets offered a shady job in the White Pine Bay underworld. Meanwhile, Deputy Shelby tells Norma that the town finds ways of handling people who do wrong. By the episode’s end, Norma (who’s recently murdered the sheriff’s friend) has a front row seat to White Pine Bay justice unfolding as onlookers gaze at a man on fire hanging in the town square.

“Nice Town You Picked, Norma” was a very solid second episode. The escalation in the fight between Dylan and Norman in the kitchen was pretty intense. It showed Norman is a little farther along his path to psychopathy than I originally thought. It makes me wonder how long they plan on making this show.

It would have been really easy for the show’s creators to make the show all about Norma and Norman’s relationship. It’s definitely smart of them to sparse out the mother/son stuff and develop the town and ancillary characters that inhabit it. Going into the series, we know where Norma and Norman end up. It seems Bates Motel is attempting to ask the question, “What made Norman Bates?” He’s currently a budding psychopath, but an overprotective mother in a secretive town that burns people won’t help him keep those urges at bay much longer.

That’s it for my thoughts on the latest Bates Motel. Don’t forget to follow me on Twitter: @ObsessiveViewer for live-tweets about movies and shows I’m watching and keep up with the blog on Facebook for all the latest posts and blog news.