You can hear more of my thoughts on the movie in this week’s episode of The Obsessive Viewer Podcast. I waited for Man of Steel to come to my local IMAX theater because I wanted to see it properly. After almost 2 months it was finally showing at the only 70mm IMAX theater in my state and I jumped at […]

You can hear more of my thoughts on the movie in this week’s episode of The Obsessive Viewer Podcast.

I waited for Man of Steel to come to my local IMAX theater because I wanted to see it properly. After almost 2 months it was finally showing at the only 70mm IMAX theater in my state and I jumped at the chance to see it. I saw it in 3D solely because I had no other choice. I won’t comment further on the 3D since I’ve already said my peace on the matter elsewhere. But, needless to say, 3D added absolutely nothing to this theater experience.

Sadly, there wasn’t much of an experience for the 3D to add to. Man of Steel simply did not deliver for me. As a superhero movie, a Summer Blockbuster and an action movie in general, it fell short on all counts. As someone who doesn’t read comic books, I go into these types of movies with a clean slate and a movie fan’s eye. What I saw in Man of Steel was a played out formula laced with an unnecessarily nonlinear origin story that took far too long to tell in a script with shockingly sparse comic relief.

But Man of Steel felt like a safe gamble on the studio’s part. They took a property that (I’m assuming) they intend to launch the Justice League movie from and created a movie that took no risks. It takes the tired “superhero origin” formula and applies it to Superman rather lazily. The end product is a pretty dull experience.

One thing that really bugged me about the origin story was that Clark’s backstory is nonlinear. The movie jumps backward and forward in time to tell the exposition in a way that doesn’t seem to serve any real storytelling purpose at all. In fact, it’s more of a hindrance than anything. Instead of latching onto the protagonist’s journey toward becoming a hero, we essentially get an out of order highlight reel with little time to get to know the character. It simply doesn’t work.

As far as acting goes, Henry Cavill impressed me. He left his own mark on the role and played Clark’s inner struggle well. Michael Shannon was a joy but underused. Amy Adams was forgettable as Lois Lane. Her acting itself was fine, but the script wasn’t there for her. Russell Crowe Jor-El was probably the best part of the movie. He was great.

I had my doubts about Kevin Costner playing Jonathan Kent. Casting him was probably the biggest source of doubt with this movie for me. I didn’t have to worry there, though, because Costner was good. However, somewhat like Lois Lane, it was the script that didn’t do the character justice.

The scene in which he sacrifices himself to keep Clark’s true nature a secret is a major source of contention with me in this movie. The Kent family happens upon a tornado (it is Kansas, after all). Everyone seeks shelter underneath an overpass while Jonathan rescues the dog. The tornado approaches and he motions to teenage Clark that he doesn’t want to be saved.

Superman tells Lois that Jonathan knew the world wasn’t ready for Clark’s gift. It’s portrayed as Jonathan making the ultimate sacrifice for the good of the world. I have trouble with that, though. The way I see it, the family is in the middle of a massive natural disaster with a small group of people riding a fearful adrenaline high. Clark simply needed to run to his dad, grab him, and run back. No theatrics, no trouble. Clark would be less exposed than he was when he saved his classmates in the school bus. Instead, Jonathan leaves his wife and teenage son to tend the farm and who knows what kinds of financial burdens. In my eyes, Jonathan is selfish. He isn’t a martyr.

If you take away the story issues, you’re left with a special effects spectacle that is as run-of-the-mill as they come. Even in IMAX, the action set pieces are largely forgettable. It may be due to the 90-ish minutes of exposition and sloppy development we were given before the action that led to me being unimpressed. Or it could have been the uninspired choreography. It’s really anyone’s guess.

I view today’s special effects as filmmakers having a pissing contest to see who can cram more pixels into their blockbusters. Man of Steel is no different and, compared to other blockbusters this season, it came up short. There’s a scene where Laurence Fishburne and Superfluous Characters #1 & #2 (#1 being played by Michael Kelly, an otherwise great actor you can see on House of Cards) are fleeing from a building that is toppling to the ground behind them. It’s a quick shot but it’s quite an awful use of green screen special effects. It looked like a visual hiccup in the way the actors were superimposed into the scene.

The rest of the action scenes were boring at best. Bystanders stand frozen in the face of danger instead of easily escaping. The heroes’ plan to defeat the villains experiences an unforeseen issue that’s literally fixed by slightly moving an object into place. The plan itself actually seemed like it was as much a danger to the planet as Zod’s. We aren’t even given the benefit of decent comic relief. The few bits of comedy felt forced, as if Snyder received a note to “make it funnier” and assigned an assistant to throw in some one-liners.

A few years ago I downloaded an early draft of Batman Begins’ script and gave it a read. David S. Goyer was the credited writer. In addition to working closely with the Nolans on the Dark Knight trilogy, Goyer wrote and directed The Unborn, co-wrote Jumper and was one of the showrunners of the one season wonder FlashForward. A show that I credit as being one of the most disappointing misfires in recent TV memory. (They had the next Lost and they botched it royally. They could have been loaded! Okay!)

So Goyer has an interesting resume, to say the least. When I finished his draft of Batman Begins, I couldn’t believe something could come so close to greatness while missing the mark completely. It was a mix of cheesy lines with a forced tone of darkness that simply didn’t work. When the end credits rolled for Man of Steel I had a similar reaction. It wasn’t until I saw Goyer’s name as the movie’s sole writing credit that it all suddenly clicked.

Maybe sometime down the road I’ll give Man of Steel another pass. As of now, though, I would have to say I just didn’t like it. I liked it more than Pacific Rim, but that’s hardly a compliment.

This week at Comic-Con, Warner Bros announced that the follow-up to Man of Steel will feature Supes battling the Caped Crusader in a Superman vs. Batman movie. Christopher Nolan and his Dark Knight universe won’t have anything to do with the project. Goyer is writing it.

I’m not sure how I feel about it. As I said before, I’m not a comic book reader. So I’m not sure how Bats and Supes duke it out in the books. All I know is that it seems like a lopsided fight. The thing that keeps coming back to me about Superman is that he’s too powerful, too indestructible. Basically, as a character, he’s the polar opposite of Man of Steel’s script. Pitting him against Batman just seems opportunistic to me and too much of a stretch.

We’ll have to wait until 2015 when the movie is released to see how it turns out, though. The best I can do is hope that Snyder and company can deliver a follow-up that can correct their mistakes here. Cramming Batman into the mix seems like two steps backward though. 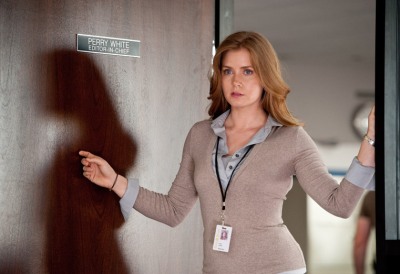 What did you think of Man of Steel? Have thoughts on the announced Superman vs. Batman movie? Leave me a comment and don’t forget to follow me on Twitter @ObsessiveViewer, like the blog on Facebook and check out The Obsessive Viewer Podcast.