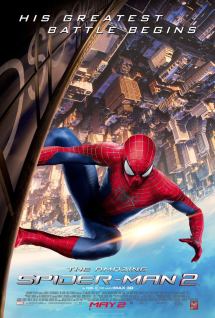 The Amazing Spider-Man 2 had plenty going against it before it opened last Friday, May 2nd. (Early showings started around 8 on Thursday.) Early reviews were lukewarm at best. Rumors of too many villains bogging down the film were strong, and incessant trailers and TV spots seemed to leave very few surprises. More than anything, ASM 2 absolutely needed to improve upon director Marc Webb’s first Spidey outing, 2012’s even-less-than-lukewarm reboot. Amazing Spider-Man 2 didn’t need to be amazing (it’s not,) it simply needed to be better (it is.)

Without the task of playing out the origin story which the first movie treated like a chore, ASM 2 is allowed to swing full-force. The movie’s strength, like its predecessor, is in its two leads. Andrew Garfield and Emma Stone bring realness to Peter Parker’s romantic life that even Sam Raimi in his original, superior Spidey trilogy couldn’t match with Tobey Maguire trying his darnedest with the miscast Kirsten Dunst.

This time around, Peter is struggling to keep the promise he made to Gwen’s dying father in the first movie. “Leave Gwen out of it,” Captain Stacy begs with his final breath, but really, who could avoid the electric Emma Stone? The movie employs a will they-or-won’t they plot that keeps the movie engaging even when it drags in the second act.

The best superhero movies succeed when the movie could work without super powers and costumes. (The Dark Knight is a brilliant crime-drama in which the protagonist just happens to be Batman.) At times, Amazing 2 is one of these movies. There are actually themes that, for a change, aren’t about great power and responsibility. Instead Peter is struggling with loss and identity. His parents are gone, his best friend is…changing, and the love of his life is leaving for Oxford University – a plot device that adds urgency to every scene featuring Garfield and Stone.

The movie and director Marc Webb seem to be asking “What is Peter if not Spider-Man?” I’m not sure we get an answer, but in the fist-pump closing scene which features the Rhino, we might finally understand the importance of Spider-Man in Peter’s life. This is where the movie soars above its predecessor which tried so hard to distance itself from the films that came before it, integral aspects of Peter/Spidey’s motivations were left behind. Peter’s character arc is complete by the end of this movie, and it should have viewers a bit worried about what The Amazing Spider-Man 3 might possibly have to offer besides more villains (six, to be particular.)

Oh yeah, there are villains in the movie. Jamie Foxx is a bit too charismatic to make loser Max Dillon believable, but his Electro sparkles. An Act 1 finale in Times Square is probably the most threatening of any of Spider-Man’s movie battles. Foxx is perfect as scared and scary. It’s a shame he is mostly underused for the second half of the movie.

Dane DeHaan as Harry Osborn does a blockbuster version of his character from the much better Chronicle. Still, when the young Leo DiCaprio look-alike is on screen it’s impossible to look away. Again, a fantastic performance saves a weak storyline. Osborn’s transformation into the Green Goblin toward the end of the movie is fast and loose, but the final product is fun to watch. As a Spider-Man fan, I couldn’t help but wring my hands with anxious glee as he cackled during the second of the film’s three climaxes.

This is true of the whole movie. Comic fans will be both appreciative and offended depending on the scene. Moviegoers will marvel at the special effects (that web-swinging!) They’ll also fall in love with both leads, and it feels like that’s what is most important to Webb, but it might not bode well for sequels. Amazing Spider-Man 2 was fun, but even with a weak tease of dread to come, I’m not sure Amazing Spider-Man 3 will accomplish the goal of these sequels: to be better.