You can read my review of every Bates Motel episode here! Last week Bates Motel closed the book on its second season in a character development-laden finale that proved me wrong on nearly all of my predictions. That’s not to say The Immutable Truth was a disappointment, though. Hardly. In fact, season 2 of Bates Motel closed on a note […]

You can read my review of every Bates Motel episode here!

Last week Bates Motel closed the book on its second season in a character development-laden finale that proved me wrong on nearly all of my predictions. That’s not to say The Immutable Truth was a disappointment, though. Hardly. In fact, season 2 of Bates Motel closed on a note of promise for some of the key players and on an ever so heightened sense of foreboding for our main character.

The finale opened with confirmation that White Pine Bay is just about the coolest town ever. We watched as Dylan wandered into the road and told Romero, “Nick Ford’s dead, I just killed him.” I was tickled that he could just up and say that to the town Sheriff.

The rest of the cold open made me hope like hell that I was wrong about Norman killing Romero. I’m glad that prediction didn’t pan out because seeing Romero and Dylan in action searching for Norman made me really hopeful for next season. 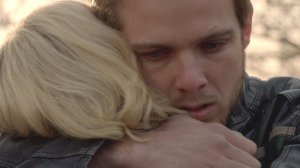 After Norman’s rescue, I was also happy to see Norma finally show her incest baby some affection. I’m hoping that this ordeal will mean that’s the end of their personal drama. It was handled well over the last two seasons, but I think bringing it around next season would be lazy and counterproductive. Unfortunately, that may mean we won’t ever see Caleb again. That’s a shame, since I really enjoy Kenny Johnson as an actor.

Given Norma’s run-in with Christine, I’m guessing my suspicions about her and George were entirely off base. I really liked Christine’s outburst. I am a fan of Norma and I’m actively rooting for her because Vera Farmiga plays her socially awkward side so incredibly well. But Christine’s outburst was such a surprise for me, considering I spent the season suspecting the brother and sister of setting up Norma.

The finale had some really good Norman and Norma stuff. Particularly, there was an interesting line where Norma told her son that she “tried to sleep with” George. It’s particularly strange considering we know she actually did sleep with him. It makes me wonder if she’s at all aware of the taboo, needy and codependent relationship she’s forged with her son.

Of course, the rest of the finale featured another more interesting moments between the two. I’m talking, of course, about the gun in the woods scene. The episode built to it quite well. Norman checking things off his suicide list (strange that Dylan wasn’t on Norman’s list, by the way) and then going into the woods felt solemn and ominous.

Norman’s lonely trip into the woods reminded me of a dying animal wandering off to die in peace. Maybe that’s what the writers were trying to convey. If so, they did it well. Norman is at times Norma’s pet, to an extent. But he’s also vicious and uncontrollable. It makes sense to have him try to end his life in that way. 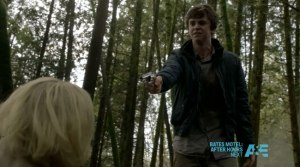 Being that this is Bates Motel and we know that Norman’s kill count isn’t anywhere near it’s end, it came as no surprise that his suicide was stopped. The scene between him and his mother in the woods was a little on the melodramatic side for me. It was still tense, especially when he pointed the gun at her. But the episode set up his internal turmoil so well that I felt a little underwhelmed by the payoff, or lack thereof.

I’ll get to Norman’s polygraph in a moment. First, I want to circle back to Dylan and Romero’s dealings with Zane and Jodie…..whatever their last name is. I really enjoyed how that subplot tied itself up. I was still floored by Romero and Dylan working together, also. I want to point out that the actual death of the siblings was filmed particularly well. The setup of Zane cutting the power beforehand was good, but Jodie’s weird joke about having a lot of guns was just weird and out of place.

Now with Zane and Jodie both out of the picture (I’ll ignore how nice and tidy that worked out), it leaves a vacuum in the criminal underworld. That vacuum is going to be filled by Dylan. It’s just about the only theory I had that panned out and I’m really glad for it. I’m excited to see how Dylan’s story evolves next season. I’m also curious how Remo is going to feel about it.

Finally, we come to Norman’s polygraph. I was a little misled by the dialogue in the previous episode. It almost sounded like Romero was seeking his dad’s old partner out because he would administer a polygraph that would be more…invasive. The actual seen looked like pretty standard cop show fare, though.

In the lead up to this sequence, I had been nervous, and even a little sour, that the show was going to defy Hitchcock’s masterpiece by making Norman more aware of his actions. The finale, however, skated the line of Norman’s self-awareness really well.

The reveal of him cultivating his alternate persona to take the fall for the murder was a great way to put a bow on the season and also honor the source material with a great homage. Seeing Norman’s psychosis grow and present itself as Norma to him made me feel much better about the trajectory of the show.

So there you have it. Season two of Bates Motel is in the books. Overall, I think season two was a step up from the first season. I took issue with some of the choices the writers made (particularly their habit of writing characters out of the show with little fanfare). But that is but a minor complaint. As I’m sure you know, A&E has renewed Bates Motel for a third season. I, for one, am eager to see what happens next.

BUY PSYCHO ON BLU-RAY AS WELL!

You can get the episode on Amazon and iTunes.