After the Shelby mess is shoved under the rug, the motel gets its first (totally not shady) customer and we’re reminded that Norman is in high school. (SPOILERS AHEAD) 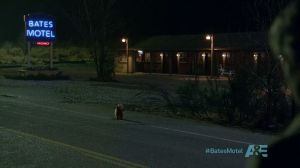 Cable series usually run between 10 and 13 episodes per season. This week’s episode almost made me wish the show’s freshman season had 12 or 13 episodes. The fallout of the gunfight last week should have been given, at the least, half an episode. Instead we get one scene with Sheriff Romero explaining how he’s going to cover up everything. It was just weird that Romero would learn that they killed Keith Summers and then agree to help them. Violent criminal or not, Keith was still his friend. It bothered me but I guess the alternative would have been to drag it out for a little too long. 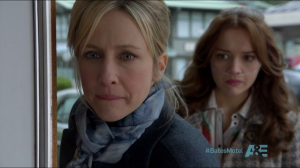 There are more pressing matters this week, however. First of all, Bates Motel is sort of open for business! Jake Abernathy, the shady “salesman” is an interesting addition to the cast. The timing is a little too plot-convenient but I don’t mind that much. I hope it makes for some compelling stories to close out the season. 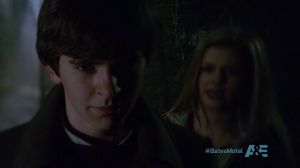 Elsewhere, Norman had a pretty bad week. Again. He was officially rejected (albeit in a pretty diplomatic way) by Bradley. Bradley seems to have her eye on Dylan now. I think it’s a testament to the writing and to the acting of Freddie Highmore and Max Thieriot that I’m really hoping Dylan doesn’t get with Bradley. It’s a little melodramatic for the show’s dark tone but it’ll devastate Norman and, given what he has lurking beneath, there’s no telling what will happen.

The week wasn’t all bad for Norman, though. He got a dog. Juno made her Bates Motel debut this week and, thanks to Emma’s taxidermist dad, she may find herself a permanent fixture in the series. Kudos to the show for a gut wrenching animal death, by the way. Freddie Highmore’s reaction was also very well done. 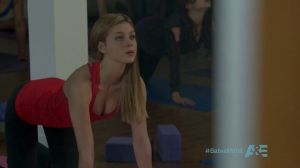 All in all it was good episode, if a little transitional. My closing remark for the week is reserved for the rejection scene. Norman storming off and repeating Norma’s warning was eerie. The scene made me very nervous that he was going to kill her right there. It was very compelling and another sign that the show is doing everything right. Here’s hoping the quality stays, Norman finally gets with Emma and Bradley does more yoga.