August was a slow month for me when it comes to my movie watching. Historically speaking, it’s a slow month for me anyways. In years past I had the start of school drastically cutting back my numbers. Not to mention, I also have the beginning of the fall TV season to vie for my attention.

So August is always a slow month. However, this year I managed to squeeze in 17 movies. I would say that the absence of school in my life may have contributed to it, but this was my best August since 2008. I think 2008 may have actually been the last August I was in school. I’m not sure.

In any case, here are the best and worst of my movies watched in August 2013.

Uproariously funny, this “workplace” comedy from College Humor is a great exercise in utilization of talent. It’s Always Sunny’s Glenn Howerton breaks from his trademark borderline sociopathic portrayal of Dennis Reynolds and proves he can lead a strong ensemble on film.

The movie is about Howerton’s Will, a guy who uses a coffee shop as an office. Ben Schwartz and Steve Little play his best friends who visit him. However, they are not to be dismissed. Schwartz’s Gino uses the intimidating nature of his job as a cop to pick up girls. Little’s Chad is a nonsmoker who uses his office’s smoke breaks to hang out at the coffee shop. Both bring a lot to the table.

The plot of the movie revolves around the owner of the coffee shop’s plans to convert it to a bistro and the triumvirate of professional slackers’ hapless intentions to stop it. With strong supporting performances by Josh Groban and Adrianne Palicki, Coffee Town is a very well-rounded comedy that makes me hope for a sequel. At the very least, it turned my attention to College Humor’s future in movies.

You can hear me talk up Coffee Town in episode 10 of The Obsessive Viewer Podcast: Cancelled Series, Spin Offs and Coffee Town. 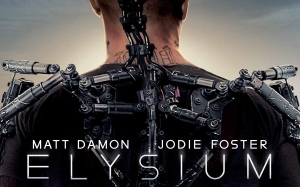 I keep postponing my review of Elysium. I don’t now why. I saw it in the theater the day it came out and my original intention was to pair it with District 9 for a Double Feature post a day or two later. But then my PS3 died, I got caught up rewatching Breaking Bad and then I started considering saving District 9 for a double feature with Gareth Edwards’ Monsters. Rest assured, my Elysium review is forthcoming.

I liked it a lot. Some people had very reasonable problems with it, though. Some slight plot holes here and there and a really forced bond between the protagonist and a child almost wrecked the movie. But a strong performance by Sharlto Copley and the awe of seeing Neill Blomkamp with a large budget makes me eager to own the blu-ray.

You can hear a more in depth discussion of Elysium in episode 11 of The Obsessive Viewer Podcast: Elysium, I Am Legend and Yahoo! Answers.

Sometimes I get in the habit of procrastinating (see also: Elysium review mentioned earlier). Occasionally a Saturday will sneak up on me and I will be unprepared for that week’s Streaming Saturday post. In some ways it’s a good thing because it leads me to watch something on Netflix with reckless abandon. I take bigger risks while in a crunch and occasionally I’m rewarded for my lack of preparation.

The Oxford Murders was not one of those occasions. This is due partly to the fact I watched it on a Wednesday. Sure. But I did watch it with the intention of recommending it on the blog. It didn’t make the cut.

The movie stars Elijah Wood as an Oxford student with a bit of an acadeic  man-crush on John Hurt’s cantankerous old logic professor. The two stumble upon a string of murders and attempt to solve the puzzle. They don’t so much as team up to catch a killer, though. Their partnership has more to do with them reveling in how clever they are than it does with stopping a criminal. There are scenes where I honestly felt like the characters should have been skipping down the street expressing their glee at being so smart.

This was one of the most pretentious movies I’ve seen. The modus operandi of the killer was that he selected victims who were “nearly dead” already, for the most part. This only succeeded in keeping any form of tension at bay. By the end of the movie I didn’t care about whatever the resolution of the mystery turned out to be. Honestly, as I type this two and a half weeks later, I genuinely don’t remember it.

This category was a tough choice for me. I didn’t think The Conjuring was a bad movie for what it was. In fact, I loved the theater experience. I saw it at a drive-in. It was my first experience at a drive-in in easily two decades, I would wager. But there were contributing factors at stake.

For one, we arrived a bit late and so I missed the first few minutes of the movie. As great as the novelty of the drive-in movie theater experience was, since we arrived late, we didn’t necessarily get the best spot. Those factors aside, however, I still think this movie belongs in this category, if only because there were slim pickings this month for bad movies.

I might have my facts wrong, but I think The Conjuring is the first movie ever to deal with the haunting of a home by a malevolent supernatural presence. Can anyone confirm? Oh, wait, never mind. One or two movies before it have tackled that subject. My mistake.

Suspending my sarcasm now. The Conjuring had a few really good scares (the clap game is a standout). Seeing it in an open area at night only added to the movie’s effectiveness. My problem with the movie arose out of a lack of character development, however. I didn’t get the sense that any of the characters were anything other than demon fodder in this movie. Because of that lapse in storytelling, I have to give it the Dishonorable Mention for Worst First Viewing in August.

I won’t fault anyone for dismissing my opinion based on the fact that I got to the drive-in late. I almost disqualified it on those grounds, myself. But if the movie somehow packs in 2 hours worth of character development in addition to the character set ups in those five minutes, then this movie has much bigger problems.

I have been neglecting my Bond 50 Project for the last couple months, unfortunately. I can’t explain why the massive blu-ray box set took a back seat in my mind, but it’s back to the forefront now. And wow, Moonraker really delivered for me.

I don’t want to step on the toes of my review later this week, so I’ll just say that I had a blast with this movie. I have loved Roger Moore as Bond through a couple lackluster entries and my devotion to his iteration of the super spy has paid off handsomely. When a Bond movie features people in space suits firing lasers at each other in low Earth orbit, my entertainment is guaranteed.

The other side of that coin is my Biggest Letdown of the month. For Your Eyes Only couldn’t hold my attention very well in the first act and due to that, the second and third acts suffered considerably.

I wasn’t a fan of the pre-credit sequence either. The combination of the On Her Majesty’s Secret Service callback and the return of Blofeld built my expectations up only to comically drop them in a smoke stack before the opening credits played.

Again, I won’t step on my review but I will say my disappointment with the pre-credit sequence set a sour tone for the movie. I understand that the stupid no longer had the rights to Blofeld. I just wish it wasn’t handled in such an awful fashion.

If you look at my chronological list of the movies I watched in August, you will see it is replete with a number of great nominees for this category. Jaws and Jurassic Park. 21 Jump Street and Horrible Bosses. Step Brothers and Brick. Hell, I could have gone the nostalgia route and chose Carpool or House Arrest.

But I didn’t. I chose Sunshine. Danny Boyle’s underrated sci-fi movie has a firm hold on me. It’s a personal favorite. I love the simplistic act structure (every act ends with Cillian Murphy in a space suit) and the overarching themes of faith vs. free will. Not to mention, the tense script and spectacular score by John Murphy.

Really though, you can’t go wrong with a movie that features Captain America butting heads with the Scarecrow.

You can see the full list of movies I watched in August here. How was your August? Let me know in the comments and find The Obsessive Viewer all over the web with the links below.