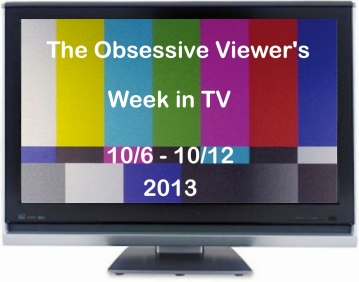 Yikes. I did not watch hardly any TV this week. This is highly unusual for me. I should explain that I had a very busy week and Shocktober viewings took precedence over television. As a result, I watched three things. Read my thoughts below and prepare yourselves for a much longer entry next weekend seeing as I will have plenty of catching up to do this week.

This section covers the episodes I watched of shows that aired a new episode this week. 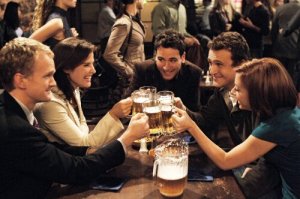 It was a solid week for How I Met Your Mother as Marshall video-chatted into the episode and Barney gets upset with Ted about helping Robin search for the locket last season. The main plot was okay. There was a bit too much “You broke the bro code” “No I didn’t break the bro code” dialogue for my tastes.

The bro code, as a general concept by itself, is funny. But after almost a decade, name-checking the bro code in the series and featuring its real-world, physical counterpart heavily in the episode teeters on the wrong side of the line between overdoing it and testing audience patience.

Elsewhere in the episode, Lily and Robin work to find a new female friend for the gal pal deprived bride to be. It was a solid B-story but it left me wanting a little more. I expected Robin to cross paths with The Mother at the end of this episode but that moment never came. It wasn’t necessarily disappointing (I don’t want everyone to meet the mother too soon) but it didn’t come to a terribly satisfying ending either.

Hopefully tomorrow’s episode is strong. The show isn’t suffering that much. The new format isn’t giving enough new blood into the show to elevate it to the level it was at in years past, but it is still a step up from last season (for me). I’m optimistic the show won’t dip too deep in quality.

I’m nearly always rewatching a series, catching up on a show I’m behind on or going through a show I’ve never watched before from the beginning. This section is devoted to those viewings. 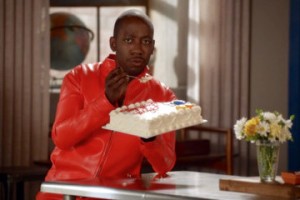 I finally finished watching season 2 of New Girl on Netflix. Season 2 ended well and has me excited to catch up with season 3 so far. One of my favorite bits in the latter part of season 2 was the episode Winston’s Birthday.

In the episode, Jess and Nick are forced to postpone the fallout of an awkward encounter when Jess’s dad shows up unexpectedly.  Meanwhile, Schmidt has doubts about a relationship and Jess has an important job interview. It’s a plot dense episode but what really makes it work for me is the titular subplot.

Throughout the episode, Winston expects his friends to acknowledge his birthday and celebrate with him. Everyone is preoccupied, though, so the audience is given private moments of Winston building himself and his expectations up only to constantly and consistently be shot down.

The gag could have been played up for drama in the end, but New Girl manages to take a strict comedic approach to it. The end result is a memorable, hilarious episode late in an already strong season.

Brooklyn Nine-Nine’s had a strong second episode. Andy Samberg is what really makes this show for me. In the episode, he tracks down a vandal tagging police vehicles with spray paint in the shape of penises. It’s a fun episode that advances Samberg’s character a bit. It also gave Andre Braugher a chance to shine as he babysits Samberg on the case of the tagger.

There’s also a subplot involving Joe Lo Truglio and a psychic that was a lot of fun. He has such a strong presence and great comedic timing in everything I’ve seen him in that I’m really hoping Brooklyn Nine-Nine survives the Fall. He deserves more of a spotlight.

That does it for this week’s TV roundup. No new TV-related purchases were made. There was just a lot of other stuff going on. What did you watch this week? Leave a comment and follow me around the web with the links below.